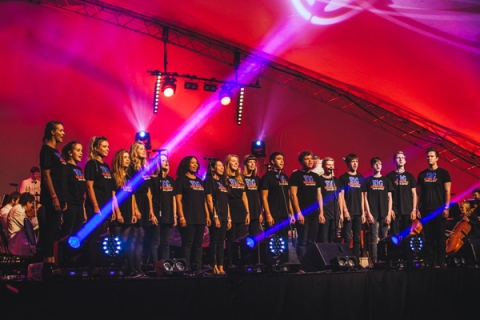 Big Adventures have previously performed alongside Viva at the annual Darley Park concert and will join the Orchestra in Nottingham on Thursday December 31 for a programme full of Hollywood and Broadway glamour.

A 20-strong choir made up of young people aged 12 to 18 will perform a selection of seminal vocal smash hits.

These include Harry Warren’s emblematic title song Lullaby of Broadway from the Doris Day 1951 film musical of the same name plus Cole Porter's fabulous Another Op'nin', Another Show - the timeless tune from the massive 1948 hit Broadway musical Kiss Me, Kate.

Big Adventure Youth Theatre Company Director David Culling said: “We are delighted to return to the stage with Sinfonia Viva and to make our debut at the Gala Concert in Nottingham.

“These are some big choral numbers and it is a feather in our cap to be invited to perform again alongside Sinfonia Viva.

“I know that the New Year’s Eve concert is very popular with audiences and the singers’ experience in front 35,000 people at Darley Park this year will hold everyone in good stead for this performance.

“Preparation is the key and we will be rehearsing hard to ensure that this is a memorable night both for the performers and the audience alike.”

Principal Guest Conductor Nicholas Kok will make a welcome return and will be joined by Pianist Ian Buckle.

He said: “We are delighted to have Big Adventures Youth Theatre Company joining us on stage to bring some extra sparkle to the evening.

“There was tremendous feedback from the players and the audience alike to their performance at Darley Park in September and I know that they will do a fantastic job with these numbers.”