Why Kim kept on running – not bouncing - for Tiggers 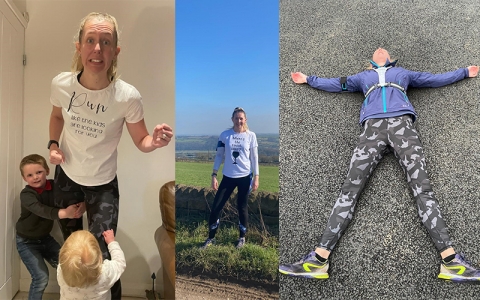 A mum of two who is attempting to run the distance of the English Channel, Peru’s Inca Trail and Hadrian’s Wall for charity has smashed her fundraising target by raising 10 times the sum.

Kim, who works at Lubrizol, in Hazelwood, is aiming to run 221 km in the hope of raising around £150 for Tiggers Pre-School, in Turnditch, where her four year-old son Jack attends.

Although she thought the challenge would take her 10 weeks, Kim has clocked up more miles than she imagined and is going to cross the virtual finish line four weeks ahead of schedule.

And Kim, who is also mum to 11-month-old Georgie, has received donations of more than £1,500, which will be used to support Tiggers, which, like many charities, has struggled financially during lockdown.

Kim, who works as an technical coordinator at Lubrizol, has received a £500 donation from the firm’s charities committee.

Kim, 30, said: “For someone who doesn’t run much at all, who hates that burning feeling and who hates being cold, I knew this was a big challenge!  My plan was to do shorter runs in the evenings when the little monsters had gone to bed and attempt a longer run at the weekend.

“I actually found that once I was out running, I might as well keep going and get the miles over and done with. I’m so pleased to have raised such a lot of money for Tiggers; the staff work incredibly hard and are always smiling.”

Kim, who lives in Belper, was expecting to average 22km - just over half a marathon – every week, but in the first week alone she completed 51.39km, running through snow, sleet, rain and ice.

She added: “I saw the idea online and wholeheartedly underestimated how hard it was actually going to be. My body aches, I’m tired and I feel like I have spent every spare second of my life running.

“I can’t believe how much weight I have lost and I’m really looking forward to putting it all back on again by eating and drinking what I like.”

During the challenge, Kim documented her progress, pinpointing the highs and lows. Despite battling endless aches, pains and sub-zero temperatures, Kim says she has particularly enjoyed the picturesque views and wildlife – from Barn Owls to Buzzards – while the challenge has enhanced her wellbeing and proved she can make a positive impact.

By week three, Kim started to notice the benefits of running, as she began to feel fitter and healthier and she appreciated a bit of peace and quiet from two children under five.

Kim said: “I’m really happy with my progress and incredibly grateful to everyone who has donated and wished me luck, it really has helped me to keep going even when the tank was well and truly empty.

“To see how generous and kind people have been in supporting me has been overwhelming and the amount I have raised so far is incredible. I can’t thank everybody enough and I know the pre-school will be so grateful.

“Tiggers plays a vital role in the local community and I want to help in any way I can to ease the difficult time they’re experiencing right now.  Due to lockdown staff have had to cancel all its fundraising events; the one which bought in the most amount of money has been cancelled twice now.

“They continue to make our children feel happy, positive and like the world is ‘normal’ and that, to me, is very important right now.”

If you would like to make a donation, please visit Kim’s fundraising page. To donate visit https://www.justgiving.com/crowdfunding/kim-reid-1?utm_id=1&utm_term=gXD8J37mq