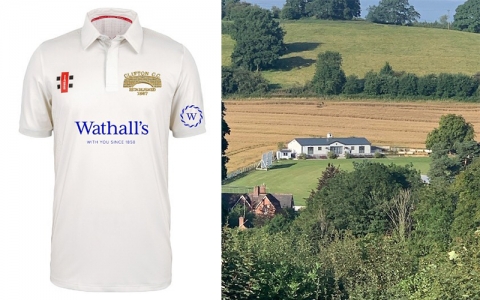 The company, which was established in 1858 and has an office in Ashbourne, will also feature on the club’s new kit which will be available for all senior players in the coming seasons.

The club has three senior teams in the Derbyshire County Cricket League with the 1st X1 playing in Division 1 this season and the 2nd X1 are reigning Harwood Cup champions after winning the cup for the third consecutive season. Clifton CC are also at the forefront of women’s cricket with a strong team who play in festivals across the Midlands.

Hundreds of young people are involved in the sport from Under 11 Kwik cricket to Under 19s and the club are a member of the ECB Chance to Shine project which gives five to 11-year-old boys and girls the opportunity to play the sport for the first time.

Clifton CC Chairman Roger Jones said: “Wathall’s support for Clifton CC will make a huge difference to the club moving forwards and help us to develop even more opportunities for the local community to enjoy the sport as players, coaches, spectators and social members.

“After a shortened season last year, we are looking forward to returning to the training nets and pitch this Spring and to sporting the fantastic new kit featuring the Wathall’s logo.”

Helen Wathall, who is the fifth generation of her family to run the company, added: “Wathall’s has been part of the Ashbourne community for many years, and we have a long-held tradition of supporting organisations which make a positive difference to people’s lives.

“Sport is an important part of everyone’s physical and mental wellbeing – even more so this year – and we wish all of the teams across the junior and senior sections every success in the 2021 season and beyond.

“We particularly hope to organise an afternoon of cricket and cake for our Ashbourne Dandelions bereavement support group this summer so that we can all cheer on the team and enjoy coming back together in the fresh air.”