Wathall’s Re-Signs with the Rams 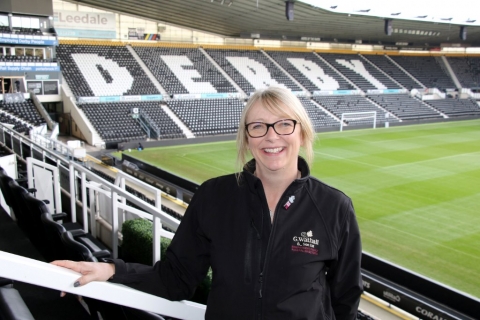 With branches in Derby city centre, Alvaston, Ashbourne Borrowash, and Burton-on-Trent, Wathall’s remains a Rams Preferred Partner enabling families to have special access to Pride Park Stadium following the unique and personal funeral of their loved one.

Options include the chance to place a commemorative brick and ashes around the stadium perimeter; using the club logo and colours for flower arrangements and coffins; inclusion in the remembrance book at the stadium; and ashes interment gatherings at The Yard or The Backyard.

All are available either as part of a funeral pre-payment plan for someone who is in the process of planning their own funeral or for the bereaved family.

The club has offered supporters the opportunity to submit the details of their loved ones who have passed away and many of these will appear during the RamsTV production on the day of the fixture.

Ashley Peden, Derby County’s Head of Partnerships, said: “For so many of our supporters, this football club is a huge and integral part of their lives and it’s important that we offer supporters and their families the chance to have a lasting memorial at Pride Park Stadium.”

Wathall’s Managing Director Helen Wathall MBE is a lifelong Rams fan and the fifth generation of her family to run the funeral directors which has been serving local communities since 1858.

She continued: “As Derby’s longest established funeral directors, we are proud to not only support the Rams but also to provide special features for families who entrust us with planning their loved one’s funeral.

“The memorial bricks, including the opportunity to place cremated ashes underneath, are particularly popular with families.

“Our specialist stonemasons at Art Stone in Burton-on-Trent, who are part of Wathall’s, create the bricks especially for each person.

“The bricks create a lasting memorial at Pride Park Stadium and many families gather at the spot to share memories and celebrate their loved one’s life, particularly before and after the special ‘Rams Remember’ matches.”