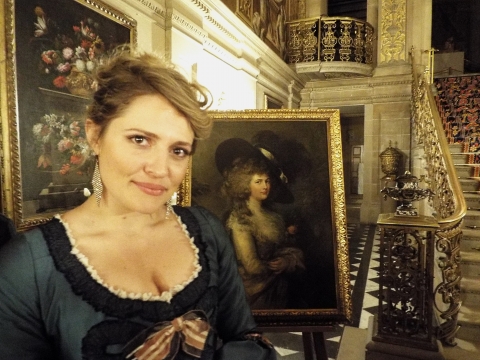 Rising opera star Samantha Clarke has gone from saint to sinner for her latest leading role.

London-born but raised in Australia and South Africa, Samantha is taking the lead role in Buxton International Festival’s world premiere of Georgiana, about the life and loves of the wife of the Fifth Duke of Devonshire who fascinated and scandalised high society in Georgian England.

Georgiana, the subject of the Keira Knightley film The Duchess, could hardly be more different to the martyred Theodora, Samantha’s first leading role in an opera.  Handel wrote it just before the Duchess burst on to the gambling houses, political hustings and salons of the London scene.

Theodora bombed at the box office when it was first performed, and Handel complained that some wouldn’t come because it was a Christian story, “and the ladies will not come because it is a virtuous one."

What the Georgians were waiting for was someone like Georgiana.

The Buxton opera explores the real person behind the scandals – a lover shared with her husband, kisses for votes, gambling debts of £3 million in today’s money – and it is Samantha’s job to reveal the woman behind the headlines.

“There are so many different accounts of her life, so many different biases,” said Samantha, who has just recently completed an Intensive Masters of Music degree at Royal Northern College of Music in Manchester as a Leverhulme Arts Scholar.

“It’s very complex. You just have to go for her side of things completely. She was forced into a life that wasn’t what she thought it was going to be, and forced into a marriage where she was completely alone.

“It’s just extraordinary what she went through,” added Samantha, whose many prizes include the Michael and Joyce Kennedy award for the singing of Strauss.

Festival Chief Executive Michael Williams, a novelist and librettist, has written the lyrics for the opera, but the music is a pasticcio –or mix – of pieces from the period: literally the soundtrack to Georgiana’s life.

“It was such a short life, as all lives were then,” said Samantha. “Everything she was going through was at my age. It’s hard for me to imagine that or even contemplate that happening in my life now.”

Having said that, Samantha’s own life has led her in Georgiana’s footsteps as she is now based in London, but she is delighted to be coming back North to Buxton.

“I went to the Northern (RNCM) so I always knew that Buxton was such a great company to be with because they really look after you, especially the young artists,” she said.

“And I feel so lucky to have had my first years away from Australia in Manchester. It was a perfect breathing space before going to London, where the bus drivers don’t shout: ‘Morning, love!’”