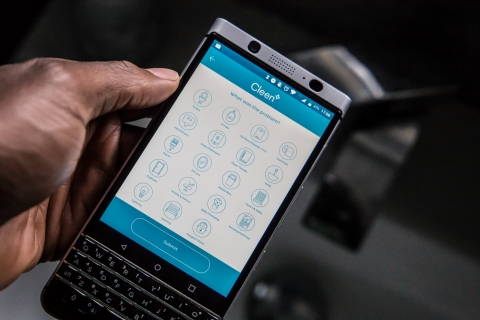 More than 100 Derbyshire loos have been reviewed through a new TripAdvisor-style app.

Brand new app Cleen, allows hygiene-conscious users to review washrooms and toilet facilities in venues and businesses and so far, Derbyshire has seen reviews in a number of venues including leisure centres, restaurants and bars.

The app which is free to download has seen positive feedback with just over 60% of the reviews with comments ranging from;

“Urinals blocked up and no toilet roll in the WC’s” and “two out of three cubicles had broken door locks.”

These reviews can then be viewed by other Cleen App users so that they can see which venues have good – and poor – washroom facilities and make a choice to visit accordingly.

Cleen App has been developed by Derby-based washroom facilities company HSG. Managing director Simon Rice said: “We are incredibly pleased with the feedback we have received so far. The engagement has been brilliant and because of this it has also allowed us to make even more changes to the app.”

"We just hope this will kick-start some venues into taking more care over their washroom facilities as well as recognising venues that consistently receive good ratings.”

“Since launching the app last month, we have already added several new features following feedback from users including enabling people with disabilities to give even more accurate feedback about their washroom experience."

Cleen app is also backed by Mike Bone, Managing Director of the Loo of the Year Awards which are held every year to encourage the highest possible standards in all 'away from home' washrooms.

Mr Bone said: "There are unfortunately many washrooms in the UK that are not fit for purpose.

"There should be toilets available for all types of users including parents with babies and people with disabilities as there are many people who will not leave home because they are worried that there will not be such facilities available to meet their needs.

"The Cleen App therefore shares the Loo of the Year Awards aim to raise awareness amongst the public of standards that should be maintained and the need for businesses and venues to raise their game."

Alongside the Cleen App, HSG has developed the Cleen Dashboard which enables businesses and washroom services providers to have full and immediate access to any issues highlighted so that they can take action and directly respond to customer feedback.

The Cleen App, is available from the App store for Apple devices and the Google Play Store for Android.  For further information visit www.cleen.world.

For businesses and washroom service providers wanting to take advantage of the Cleen Dashboard, please email dashboard@cleen.world or visit the website.