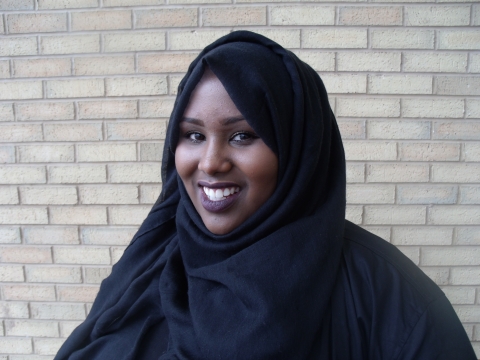 A sixth form student at

Merrill Academy in Alvaston is sharing her knowledge of Female Genital Mutilation with fellow students at the Derby school as part of her bid to raise awareness of issues that affect women across the world.

Ayaan Yusuf (18) from Alvaston recently completed training in the issue and is now assisting staff in raising awareness of this issue with students at Merrill Academy.

She is also planning to hold similar talks across the city as part of her and her family’s work with the Eurasoma charity which was set up by her uncle Hassan Ali who died in May.  The charity supports people from Somalian heritage with a wide range of services including translation and accessing services that they need.

Ayaan’s parents were originally from Somalia.  She was born in Holland and came to Derby when she was seven.  She speaks fluent Dutch, Somalian and regards English as her third language.

She joined Merrill Academy when she was 11 and is now in her final year of sixth form with her sights set on going to university and training to be a midwife.

Ayaan explained: “Through Eurasoma, my cousins and I were invited by an international charity to undergo a four-day training programme about FGM.

“I have had a great experience at Merrill Academy and have grown so much thanks to some inspirational teachers.

“It was therefore fitting that I started the awareness sessions here at school so that people from all cultures and backgrounds would have a greater understanding of FGM.

“My mum is a single parent and has done an amazing job bringing us up.  All the women in our family are very ambitious and I consider myself lucky that I have a voice and that my views count.

“There has never been any suggestion that I should undergo FGM but it is horrifying that this still happens to Muslim girls and women across the world, including the UK.

“I wanted to undergo the training to know more about the issues so that I can spread the word here in my local community.”

“FGM has nothing to do with religion.  Nowhere does it say in the Koran that women and girls should undergo FGM.

“It is more of a cultural myth that girls who do not have this done are not clean.  It is barbaric and scars women for life – causing them horrendous problems in the future.

“School holidays are a particularly dangerous time for girls when they are tricked into going back to their parents’ homeland so that the operation can be done by the family there.

“As with all things, education is the key to changing things and we need to raise awareness here as well as in Africa where FGM is particularly prevalent to make sure that this becomes an unacceptable practice.

“We are lucky in the UK that we have a good education system so this is a good place to start to give girls the confidence to speak up against this within their own families.

“Through my talks to other students, a key message is about respect – whether that is for women, other cultures or teachers at school.

“My dear uncle, who was another father to me, was a well-respected man in the local community and I want to make him and my family proud.

“I have a big voice which, during my time at Merrill, I have learnt to use in a positive way.  I hope that this is the first stage on a road to be able to speak up for women who are unable to speak for themselves for whatever reason.

“I am looking forward to moving onto the next stage of my education and want to work in midwifery. My ultimate goal is to set up a series of hospitals in Africa specialising in women’s health.”

Merrill Academy Vice Principal Paul Sharp concluded: “Ayaan is inspirational and a positive and caring role model to other students at the Academy.

“Her work in supporting staff in delivering assemblies on such illegal practices and abuse of children is commendable.

“All schools have a mandatory duty to be highly vigilant on the signs of risk which some children face. Raising staff and student awareness is therefore a key part of our safeguarding responsibilities.”