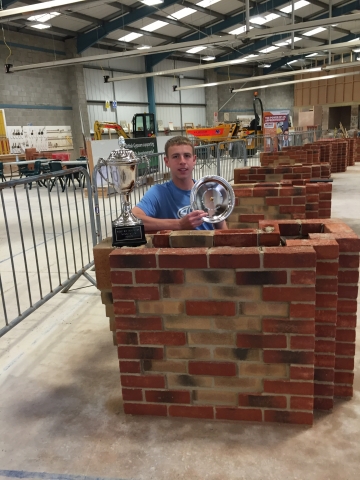 A local apprentice has clinched the gold medal in a national construction competition.

Jordan Richards (20) from Awsworth is an apprentice at GF Tomlinson – completing his qualifications at Derby College. He represented the College in the Guild of Bricklayers national competition held recently in North Devon and after a gruelling six hours of work – came top out of eight other regional winners.

Kevin Dodds, operations manager for G F Tomlinson, said: “We’re incredibly proud of Jordan who has impressed us all here at G F Tomlinson with his skills and dedication to the trade. I’d like to thank Jordan for all the hard work and dedication he is putting into his apprenticeship. “It’s brilliant to see our apprentices doing well not only in their day to day work onsite, but particularly in a competitive environment. The Guild of Bricklayers is a very prestigious competition, so he has done extremely well to win.”

Jordan is also waiting to hear whether he has won a place in the senior bricklaying finals of the SkillBuild competition which will be held later this year having come second in the regional finals. He said: “I have really enjoyed these competitions and it is very satisfying to complete the set design and then wait to hear what the judges say about it. “It was a complicated design but I had practised hard at College and was confident that I would do well.”

Derby College Head of Construction Tracey Hutchinson concluded: “Jordan has demonstrated just the same high levels of skills and commitment throughout this competition as he has done throughout his time here as a student at the Ilkeston campus and then as an apprentice. “Derby College has an excellent track record in this prestigious annual competition and I am delighted that we were once again representing the Nottinghamshire and Lincolnshire area in the national finals.”