Join The Ghosthunters’ Club at Buxton Festival Fringe in July 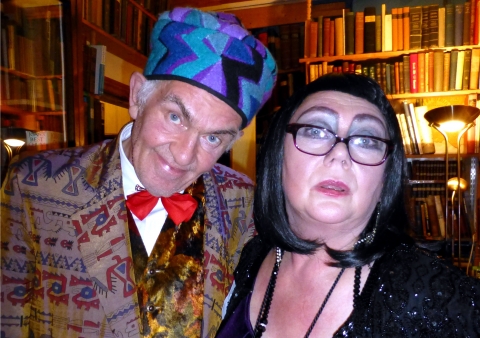 'Strange murmurings and mumblings in the cellar. Unearthly flutterings and mutterings in the attic - a spooky tongue-in-cheek interactive show that will make you laugh … and shiver!’

Terry Naylor plays Professor Tony Stoney-Middleton, ably supported by Angela Hulme playing his right-hand woman, Miss Pringle. They sign up 12 ‘apprentice’ Ghosthunters at a time and lead them through all five creaky floors of Scrivener’s Book Shop, hunting ghosts, discovering clues found within books – and on the way solving a ghostly mystery. It is an hour of fun and laughter in which the audience are encouraged to participate as much as possible. It was deliberately devised to be as visual as possible, with lots of gags, and suitable for all the family. It went down so well in 2014, getting a rave Buxton Festival Fringe review: “A marvellous treat … delightful entertainment, amusing and pleasantly spooky” so we were encouraged to repeat the show for Halloween 2014 and again this year, over two weeks during Buxton Festival Fringe 2015.

Now in their 12th year, Terry Naylor is director of Buxton Festival Fringe favourite Cul-de-sac Theatre (winners of 2003 Best Drama award for Endgame by Samuel Beckett) and is proud to bring their site-specific installation The Ghosthunters’ Club to Buxton. At the Buxton Festival Fringe in 2012 they premiered The Transit of Venus and in 2011 Telling Lives, both by Eric Northey, also winning favourable reviews for Beckett’s Waiting For Godot at The Pauper’s Pit in 2010.

Terry’s wife Miranda Midlane took over as owner of Scrivener’s Books and Bookbinding last year. It is a marvellous emporium sprawled over five floors, set up by Alastair Scrivener 20 years ago, and attracts such eminent folk as Bill Wyman (looking for Rupert Bear Books!), Derren Brown, Jarvis Cocker and Magician, Paul Daniels. Terry was immediately struck by what an atmospheric place it was and got to work on an interactive, intimate show - devising The Ghosthunters’Club.

Please note:  This is a promenade show with lots of stairs and numbers are limited to 12 per show.  A family-friendly show, suitable for age 8 upwards.