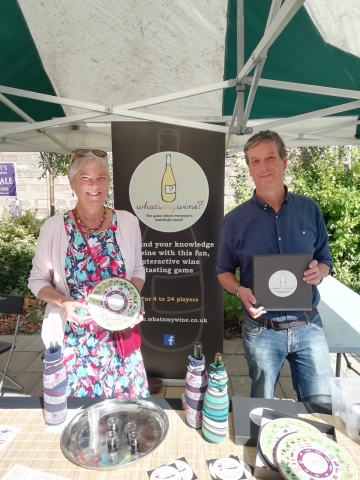 Spending numerous late nights around the kitchen table thinking about wine may not seem like a productive pastime – but for former teacher Adam Salt it’s turned into a business!

Father-of-two Adam, of Wirksworth, Derbyshire, started inventing games as a boy testing out ideas with his brother in the garage of their childhood home and he’s carried on ever since.

A few years ago this entrepreneurial drive prompted him to combine his love of wine and his love of games.

“I’d always been interested in wine and wanted to find out more so had been to a few wine tasting events,” explained Adam. “But I found them rather intimidating and realised that many other people did too.

“I thought I could come up with a better idea and spent many nights sitting at my kitchen table thinking about how to make wine tasting a fun, group game. I also wanted to spark an interest for people to find out more and take away the snobbish side of wine tasting.

“Eventually I had the idea about inventing a way of people enjoying this hobby in the form of a simple, accessible and interactive game which made wine tasting fun for everyone!”

Adam, who now works for a charity supporting disabled young adults, teamed up with friend and now business partner Vicky Penrice as Pensal Partnership in 2018 and the result was ‘what’smywine?’ – a game they got into production and launched together in April this year.

As part of the game’s development they were careful to make it fun and uncomplicated – something which they found was lacking in traditional wine tasting events – and tested their prototypes out on willing friends of friends to make sure they were on the right track.

Adam added: “In all the wine tastings I’d been to you tasted a lot of wines and made a lot of notes.

“But when the wines were finally revealed two hours later it was difficult to recall the details of earlier wines. Our game is very immediate in that each bottle is revealed after each tasting round so you know exactly how it tasted and you remember the facts about it too so it’s educational.

“We wanted to have something that was interactive and that everyone could get involved with regardless of your knowledge about wine. That’s why we included a fun section called The Pitch where teams have to use words, song or actions to describe the wine. This is a game for novices as well as self-proclaimed experts – in fact just a game for anyone who enjoys wine.”

And the feedback Adam and Vicky have had to their new game so far shows that they’ve pitched it just right.

“The reaction to what’smywine? has been absolutely brilliant,” said Adam. “Our initial trials with family and friends – from four players to a group of 30 plus people with me hosting on the mic – went amazingly well, was lots of fun and the game achieved just what we wanted it to.

“We’ve had a great response to our game from buyers at the markets we’ve been to so far and now we can’t wait to start getting it out at Christmas markets across Derbyshire and beyond. At this time of year it makes the perfect festive gift for anyone who enjoys wine!”

what’smywine? has no fiddly counters, cards or pieces to move and there’s no board. What it does have are cleverly designed wine dials, tasting notes and simple instructions. Players just need socks to cover the bottles so the label can’t be seen, a few pencils and some paper – and of course some wine to taste!

what’smywine? will be available at various Christmas markets across Derbyshire in November and December and can also be purchased online at www.whatsmywine.co.uk