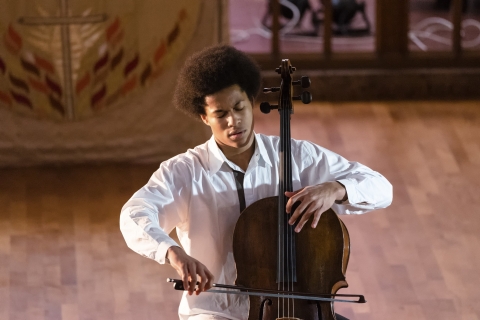 Celebrated East Midlands’ orchestra Sinfonia Viva will be in a romantic mood for itar annual New Year’s Eve Gala Concert at the Royal Concert Hall, Nottingham with a programme full of glitz, theatricality and fun.

Entitled, ‘Always On My Mind’ the programme features timeless musical romances linked to the theme of love.

These include classic pieces from Tchaikovsky Such as the ‘Rose Adagio’, stirring renditions of Bizet’s ‘Carmen Suite’, Elgar’s ‘Salut d’Amour’ and popular show tunes including the ‘Anthem’ from Chess and the Elvis Presley classic ‘Always on My Mind’.

Sinfonia Viva, which has celebrated its 35th anniversary as the orchestra of the East Midlands this year, will be led by Conductor Nicholas Kok and joined again by Nottingham superstar cellist Sheku Kanneh-Mason – the BBC 2016 Young Musician of the Year who made his debut with the orchestra last New Year’s Eve.

The vocal soloist will be local singer and fireman Andy Quinn who shot to fame on Michael McIntyre’s ‘Big Show’ on BBC One with his stunning rendition of 'Bring Him Home' from the musical ‘Les Miserables’.

He is due to release his first album ‘Unexpected Star’ following online financial backing from fans on Kickstarter.

With the popular 6pm start and 8.15pm finish, there is plenty of time for the audience to continue their glitzy New Year celebrations in style after the concert has finished.

Nicholas Kok, who introduces each piece to the audience, said: “We chose this year’s theme in recognition that love and romance are the greatest inspiration for some wonderful music over the centuries to present day.

“Returning to Nottingham every New Year’s Eve is a highlight in all the players’ busy schedules.

“We are particularly delighted to be joined again this year by the fantastic young cellist Sheku Kanneh-Mason who was a huge hit with the audience last year and, for the first time, by Andy Quinn who is deservedly making his mark on the musical world.

“The earlier time for the Gala Concert has proved to be a winner with audiences over the past four years and the combination of lyrical melodies and rousing renditions is sure to put everyone in the celebration mood on this very special night of the year.”

Tickets start from just £15 and the popular Premium Seats are again available which include a free programme available on the night. Tickets are on sale now from the Royal Concert Hall Box Office, Tel 0115 989 5555 or online at www.trch.co.uk .