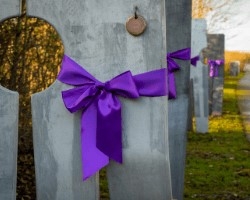 Eleven new statues have been added to the ‘Walking Together’ mining memorial at our Markham Vale Business Park, commemorating miners who tragically lost their lives in 3 major disasters at Markham Colliery.

The ‘Walking Together’ memorial trail by Artist Stephen Broadbent symbolises a miner’s journey to the pit and back and represents the men who lost their lives in the disasters of 1937, 1938 and 1973.

The new statues take the total of life-sized steel figures at the site to 88 and we continue to work alongside partners to fundraise and see the target of all 106 figures installed. This installation sees the completion of the memorial figures commemorating those men who died in the 1973 disaster.

The Markham Vale Business Park is being developed alongside HBD on the site of the former colliery. The memorial acts as a permanent reminder of the site’s significant mining heritage.

Our Cabinet Member for Clean Growth and Regeneration Tony King, said:
“It is vital that Markham’s mining heritage is not forgotten, and this significant mining memorial trail supports not only the sharing of our heritage, but is also an important outdoor place for socially distanced wellbeing and reflection during the current Covid restrictions.

“As we work towards completing this important memorial project, I’d like to thank all of the sponsors for their generous contributions so far, including Great Bear Distribution with partners Reckitt Benckiser & Henkel; Derbyshire Environmental Trust through the Landfill Communities Fund; HBD; and family & community donations which have funded the most recent group of figures.”

The most recent additions are dedicated to:

We've been working with Markham Vale Heritage Group volunteers, Beam and local developers to recognise and honour the important historical significance of the area.

Due to the coronavirus pandemic it has not been possible to hold a physical event to unveil the latest figures. Instead a short film has been produced as a virtual commemoration.

More information about the colliery and the miners who lost their lives.