Derby economy set to bounce back in 2021 says report 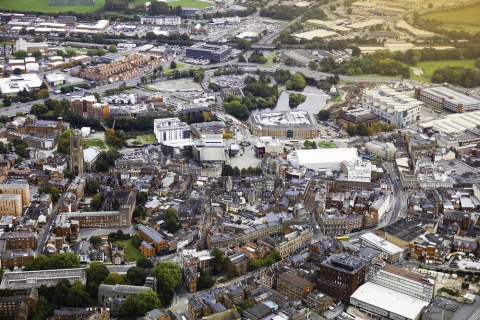 Derby’s economy is expected to bounce back stronger than anywhere in the East Midlands, according to a new report.

The latest UK Powerhouse report, published by law firm Irwin Mitchell and the Centre for Economics and Business Research (Cebr), predicts that the city’s annual GVA growth in the second quarter of next year will be 25%, ahead of Leicester (24.9%) and Nottingham (23.2%).

The report, which assumes a substantial proportion of the UK population will have received a Covid-19 vaccine by the middle of next year, states that Derby’s economic output is expected to increase by 7.3% to £6.7 billion by the final quarter of 2021, with employment moving back into positive territory at 5.5% growth.

John Forkin, managing director of Marketing Derby, said: “The reports shows that the fundamentals of our economy remain strong and with the vaccine roll out, Derby is well placed to overcome the current challenges and take full advantage of the predicted recovery in 2021.

“The city already has a plan in place, a priority of which is to diversify the city centre economy and here at Marketing Derby we have noticed a definite pick-up in investor interest.”

Despite rapid GVA growth, Derby’s employment levels are expected to fall by 0.8% annually at the point when the Government’s furlough scheme finishes.

Nottingham is predicted to see a 0.6% fall, while Leicester is expected to take a bigger hit on jobs with a 5.8% reduction.

However, Derby’s employment market is then expected to pick up in the second half of the year.

“Although the labour market is likely to take a hit when the Government’s furlough scheme comes to an end, there are some encouraging signs that the economy will perform well next year and employment levels will start to recover.”

According to the UK Powerhouse report, cities in the south of England are expected to emerge from the crisis with the most intact labour markets, with nine out of the 10 locations for the highest job creation being located in the south.

Victoria said: “It is striking that the southern city economies are set to recover more quickly than the rest of the country in terms of employment growth.

“In the last three months of 2021, job creation rates in places like Reading, Exeter and Oxford are predicted to be much higher than in the East Midlands.

“The Government has talked a lot recently about its levelling up agenda but it’s time for action, not more words.”

Josie Dent, managing economist at Cebr, said: “The decision by the Chancellor of the Exchequer to extend the furlough scheme has saved hundreds of thousands of jobs.

“The impact of the ending of the scheme in March 2021 is expected to be far smaller than it would have been in October 2020, as there is considerable hope that in spring the virus will be much more containable.

“By the end of next year, all Powerhouse cities are expected to be in recovery-phase, with positive annual GVA growth forecast across the board in the final quarter of 2021.”