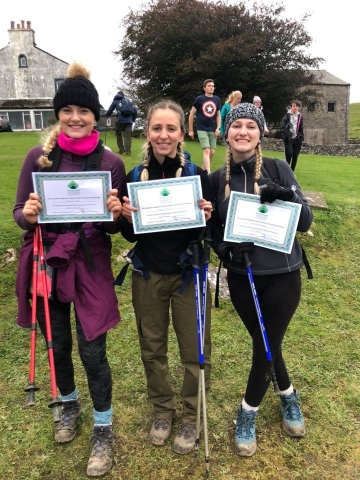 On 5th October, four hiking enthusiasts from The Derby Conference Centre - Rebecca Prime, Jessica Wood, Eleanor Sainsbury and Richard Hindley - took to the Dales of Yorkshire to raise money for me&dee. Through all the blood, sweat and tears they managed to raise a whopping £1,800.

me&dee is a charity that supports families through difficult times and circumstances. They organise special memory holidays for people whose time is precious - it really is a great cause to fundraise for.

In the build-up to the big day, the team went through a rigorous training regime. Throughout 2019, they bested Snowdon, took up veritable residence in the local gym and even marched around Edale’s Kinder Scout Trail twice in one stint. That’s about 17 miles - or like walking from Derby to Nottingham and a bit further.

If the training was tough, the climb itself was even tougher. After camping out for two nights, the climb started pretty well. The predicted rainfall held off - and the elements were mercifully calm as the team made the ascent.

The three mountains - Whernside, Ingleborough and Pen-y-ghent - have a combined height of 7,064 feet. This ascent is the same distance as getting to the top of Kilimanjaro (and then carrying on a bit). Only you’re in Yorkshire.

The final third of the trip, up Pen-y-ghent, was the most mentally challenging. Notoriously steep, the physical strain was almost too much for the team. In the end, however, they prevailed. The view from the top, by all accounts, was well worth sweating out in the chilly Yorkshire breeze.

Rebecca Prime, Sales & Conference Office Manager, commented: “We think it’s incredibly important to support local charities. But why just hold a bake sale or a BBQ - we wanted to take on a new challenge that none of us had done before. And it’s safe to say we smashed it!”

You can find out more about The Derby Conference Centre here: https://thederbyconferencecentre.com