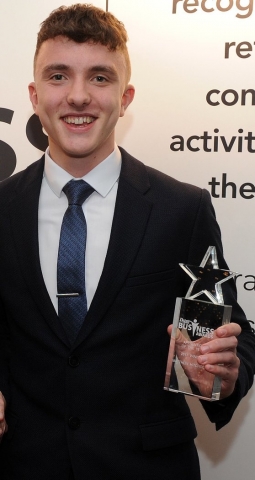 A trainee Quantity Surveyor who has recently completed an apprenticeship with Derby College has been hailed Apprentice of the Year in the Derbyshire Times Business Awards 2017.

Matthew Hitchcock (19) from West Hallam works for Keyclad in Heage which is part of the Bowmer & Kirkland Group.

He has attended Derby College on day release and achieved triple distinctions stars in the BTEC extended diploma in Construction and the Built Environment – which is a full time qualification - with his sights set on gaining a degree in Quantity Surveying part time at Nottingham Trent University.

Matthew said: “Having won the Apprentice of the Year title at the Derby College Peak Awards earlier this year I was honoured that they nominated me for this county award.”

“I chose to start an apprenticeship because I believed that the practical skills you learn at work are extremely useful for advancing in your chosen profession.”

“After doing work experience at Bowmer & Kirkland, I knew that I could learn more through an apprenticeship with them which is why I applied to get a job at Keyclad.”

“I love my job - working for one of the UK’s largest façade and roofing contractors called Keyclad and am part of the commercial department to make sure each one of Keyclad’s projects are on budget, on time and of the highest quality to achieve maximum client satisfaction.”

“My apprenticeship has given me the tools and ambition to work as hard as possible to become a Chartered Quantity Surveyor through going to university and completing my APC to join RICS.”

Matthew’s assessor at Derby College, Craig Tansley, said: “Matthew can only be described as an outstanding apprentice who is always an absolute pleasure to teach.

“His attention to detail is beyond question and is now being used in College as the model that all apprentices should work towards. He is a model apprentice and employee and truly deserves this recognition for his hard work and standard of achievement.”

James Evans, Keyclad Joint Managing Director, concluded: “Matthew came to Keyclad as a summer placement and we immediately saw the potential he had.