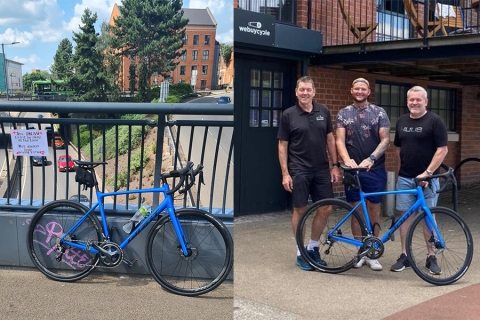 Rocco Hawkins (37) from Spondon caught the attention of many people in city last April as he walked to bridges to leave handwritten notes of support for those struggling with mental health.

He has now been supported by triathlon kit designers HUUB in Full Street and Webuycycle which also operates from the HUUB Building and they have teamed up to gift him a Giant Contend Disc road bike.

Dean Jackson, founder and owner of HUUB, explained: “Bridges of Hope is particularly important considering the impact that the pandemic has had on people’s mental health and we were keen to support Rocco in his important work.

“Recent news that some of his messages had been destroyed was particularly upsetting and hardened our resolve further to back this campaign.”

Paul Martin from Webuycycle, a company which specialises in selling quality pre-owned road, triathlon and mountain bikes, added: “I have recently lost a friend who committed suicide and, as a former teacher for 30 years, I know just how fragile young people’s mental health can be, particularly in these difficult times.

“Supporting Bridges of Hope was therefore an easy ask and if our support helps Rocco save just one life then it will be more than worthwhile.”

Mr Hawkins responded: “I am overwhelmed by Dean and Paul’s support.  The bike is really lightweight and easy to ride so it’s now much easier to get around to different bridges and to travel further.

“It was just the lift I needed after finding out that someone had thrown the messages posted on a bridge in Mickleover in the bin.  I understand that not everybody will appreciate why they are there but I hope they appreciate that someone thinking about suicide needs to be distracted and think twice before jumping.

“All I have ever wanted to do was use my own experience of mental ill health to try and help save a life.”

Rocco, who said alcohol ruled his life as a teenager, has been through his own battles after being assaulted in the street last year. He had a bleed on the brain and started to hear voices and hallucinate.

Twice, he stood on bridges in Spondon and was talked down by police. After four months in the Radbourne Unit, he was discharged weighing 18 stone.

He has since lost four stone, cycled over 700 miles, completed nine marathons and is clean of alcohol.

He has also set up a Bridges of Hope Facebook group offering mutual support https://www.facebook.com/groups/253872322700672