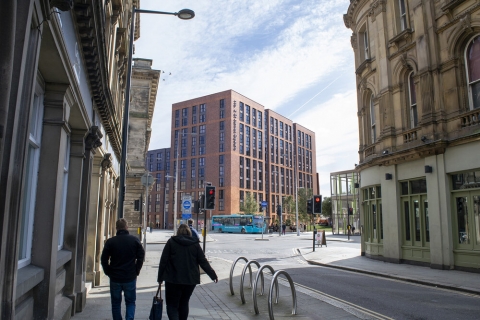 Detailed planning permission for the first phase of the Becketwell regeneration scheme is set to be considered by Derby City Council’s planning committee tonight, with officers recommending approval.

St James Securities has submitted a reserved matters application for 259 residential units, along with internal and external resident amenities, plus two ground floor commercial units, on land formerly occupied by the Debenhams store, which has since been demolished.

The Becketwell scheme has garnered strong support in the city, not least from Marketing Derby and the city council itself.

In a letter submitted to the committee supporting the application, John Forkin, managing director of Marketing Derby, said: “At Marketing Derby, we welcome the proposals of a scheme that will have a transformational part in stimulating the local economy through the development of city living.”

In a statement, St James Securities said: “We are looking for a favourable decision this evening to enable the Becketwell scheme to commence in earnest in May.

“St James Securities have successfully delivered a number of similar developments in other cities and we are confident about the potential of Becketwell and the positive impact this high-quality development will have on the city centre in the months and years to come.”

The reserved matters application looks in detail at the visual impact of phase one and features a ‘skyline study’, which analyses how visible the scheme would be from a number of different viewing points in the city.

The residential units, aimed at the build-to-rent market, will be created in one single building, which will be stepped in height up to 11 storeys.

It is hoped that building work could start this spring, with the apartments being constructed alongside a new public square.

Becketwell is seen by many as a key project in terms of helping Derby economy bounce back from the impact of the coronavirus pandemic, alongside other residential-led schemes in the city’s masterplan such as the Nightingale Quarter and Castleward.

Built across a number of phases, Becketwell would also eventually feature office space and a new 3,500 capacity performance venue.

According to Mr Forkin, schemes like Becketwell will attract more people back to the city centre.

In his letter of support, he wrote: “Successful city centres are key drivers for the economy.

“Marketing Derby is working with several end users who are looking to relocate back into Derby city centre from other parts of the East Midlands.

“One of the key drivers for this is the regeneration of the Becketwell area and access to city living for their employees.”

The city council’s own Regeneration and Major Projects department is also fully behind the scheme.

In a letter by the team’s head, Catherine Williams, she wrote: “The proposals represent an exciting and unique development that will deliver significant positive change and benefits for the city, bringing back into use a key brownfield site in the city centre that has been vacant for an extensive period of time.

"The proposals represent the first phase of a major investment in the city centre (circa £200 million in total) and will lead to huge benefits for the city.”