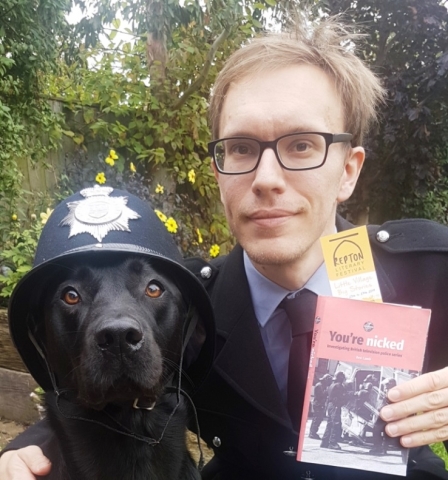 Dr Ben Lamb, with the help of the ‘lab’ – Bagheera – explores the history and impact of TV crime drama from Dixon of Dock Green to Happy Valley at this year’s Repton Literary Festival  (25 – 27 October).

Top crime writers, actors and academics are planning a heist at this year’s Repton Literary Festival this October. They will take over part of the three day event to explore everything that is good about British crime drama.

To explore what it all means, Dr Ben Lamb, the UK’s leading expert on TV crime drama, will outline what the changes since Dixon of Dock Green in the 1950s up to Happy Valley now tell us about the way our world has moved on.   His new book ‘You’re Nicked’ is published later this year.

“TV crime drama is hugely popular entertainment,” says Dr Lamb, “but it also reflects and perhaps even shapes the society we live in. In series like Line of Duty we see intense violence and the spotlight turn inwards on the police and police conduct, but we shouldn’t forget that even early editions of Dixon of Dock Green, in 1956, featured acts of police corruption.  Z Cars in the 1960s depicted domestic abuse which reflected the times then.”

Festival director John Cavey is impressed with the line-up of speakers on show.  “It is a veritable identity parade of talent across the three days of the event.  It would be a crime to miss it,” he says.

The Festival will run from 2pm on Friday 25th October until 2pm on Sunday 27th October.

Caroline Bale’s talk – the story of the psychotherapist – takes place at 1.45pm on Saturday 26th October.

To view the full programme and book tickets visit: www.reptonliteraryfestival.co.uk