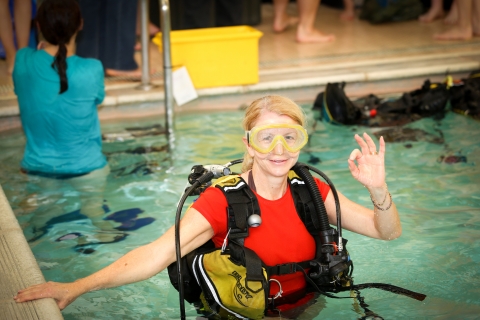 THE UK’s biggest ever women only scuba and snorkel try-dive has been declared a success after 54 ladies and girls took the plunge, as part of the inspirational This Girl Can campaign.

There were hugs and smiles all round as grandmothers, mothers, sisters, grand daughters and friends showed true girl power, at the event organised by the British Sub Aqua Club’s East Midlands regional team.

The unique try-dive at Londsdale Pool in Mickleover, Derby, on Saturday, aimed to to encourage more women and girls to have a go at diving, as part of BSAC’s partnership with Sport England’s This Girl Can campaign.

Among those who had a go under the watchful eye of BSAC’s expert coaches were Imman Raffiq, 11, from Mickleover, and her sister Sanehah, aged seven.

Imaan, a Littleover Secondary School pupil, said: “It was amazing and I loved being in the deep end on the bottom of the pool. I enjoyed learning how to put all the equipment on, it was heavy until you got in.

“I’d love to dive in the sea and see fish and things like that. I never thought I’d be able to dive and I was amazed how easy it is.”

Sanehah, a Ravensdale Junior School pupil, said: “Snorkelling was amazing and I loved being in the deep end. It’s amazing seeing everything underwater so clearly.”

Among the women who took part in the event were yoga instructor Laura Roffey, also from Derby, who decided to have a go after losing one-and-a-half-stone as she approached her 50th birthday.

Laura said: “It was exhilarating diving to the bottom of the pool, which was an amazing contrast to the tranquillity you felt being surrounded by so much water. I loved it!”

Three generations of one family from Ilkeston also had a go, after grandmother Margaret Weightman went along to watch her daughter Sarah Webster and granddaughter Abby, and ended up also getting in the water.

Friends Lisa Potter, 40, and Nadine Farnsworth, 26, from Nottingham, who have helped each other battle cancer went along, to celebrate their bond as “chemo sisters” with the dive.

And Holly Newton, 18, from Rutland took part as her family is on a mission to try out 52 sports in 52 weeks, to raise funds for Cancer Research as her grandfather battles the disease.

Event organiser Linda Ritson, diving officer for the East Midlands Sub Aqua Club said: “We decided to make it a female only event so there was no pressure on those women who decided to give it a go and that decision has paid off as many women taking part have praised us for doing so.

“It means there is no pressure and the women can see how much of a fun sport diving is and chat about training, clubs, and the structure of BSAC all in a non competitive atmosphere. It really means women can build confidence.”

BSAC is the national governing body for scuba diving and is made up of 120 dive centres and 1,000 plus family friendly and sociable clubs, run by volunteers, up and down the country and abroad. The Duke of Cambridge is the club’s President.

It represents more than 30,000 scuba divers and snorkellers and welcomes new members from complete beginners upwards including those who have trained with other agencies.

BSAC National Diving Officer Sophie Heptonstall, of Warrington, is one of five BSAC This Girl Can Dive Ambassadors around the UK, and also attended.

She said: “It’s been amazing and BSAC’s East Midland region has done a wonderful job taking the This Girl Can campaign to a whole new level. They have put an amazing amount of voluntary work into making this event the success it clearly is.

“Diving is a very equal sport, you do not need to be physically strong. Once in the water everyone is absolutely equal in every respect.

“And it doesn’t matter what age you are, it’s a sport families can participate in together. It’s not expensive, most clubs have equipment that can be used until members can afford to buy their own. And there is a very definite and welcoming social side to every club.”

Sophie, who works as a marketing manager, added: “It’s important we get more women into diving and joining clubs. Events like this help so much as it’s non- competitive and very relaxed.

“But having joined a club most women would find it is friendly and they are treated absolutely equally and the environment is essentially non-competitive.

“The East Midlands region has done a fantastic job promoting BSAC and showing these ladies they really can enjoy a new sport – these girls really could!”

Adrian Collier, BSAC’s East Midland’s coach and a national instructor, helped organise the event – although he remained outside the pool building while the try dives were in progress as only women were allowed inside.

He said he was delighted with the number of women who took up the challenge, adding: “We came up with the concept alongside Sport England’s This Girl Can campaign, which aims to get more women into sports of all types.

“It’s been a wonderful team effort and to get so many women and young girls into the water to give scuba diving a try is amazing.

“I don’t think anyone has ever done a try dive event on this scale and certainly to get so many women in the water is a first.”

He added: “It’s a unique event and we wanted to make it easier by making it a women only event. That decision has paid off as many women have told us it’s one of the reasons they decided to come along.”