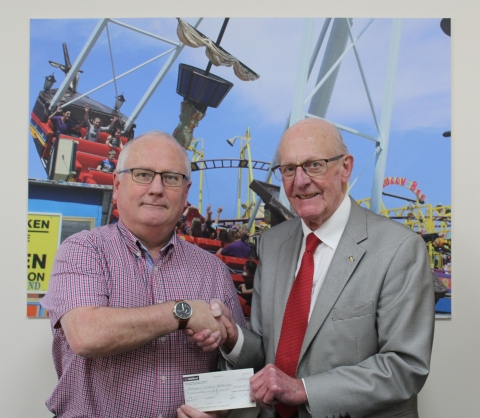 A man who dedicates his spare time to helping vulnerable youngsters was rewarded with his own parking space at work - which he auctioned off to raise money for a children’s charity.

Simon Evans, who works at Lubrizol, in Hazelwood, near Belper, was given the Christine Sewell Charity and Community Award by the firm in recognition of his dedication to children in Derbyshire.

Simon and his wife were foster carers before the pair both began volunteering as Independent Visitors and also Advocates for looked after children with the charity Change Grow Live, (CGL).

Lubrizol honoured their efforts outside of work with the award, which entitled Simon to a designated car parking space of his own at the Hazelwood site and a donation of £500 for a charity of his choice.

He gave the money to Derbyshire Children’s Holiday Centre, in Skegness, and raffled off the car parking space to raise a further £340 for the charity which provides breaks for children who need them most.

Simon, who has worked at Lubrizol for 30 years, said: “I get to work early enough not to worry about parking spaces, so I raffled off my dedicated space for £1 a day, which raised a bit more money for the holiday home.

“My wife and I have supported this charity for a long time, and it has a place close to our hearts because we are very much aware of the need for disadvantaged children to have a much-needed break.”

Simon, who is a Regional Business Manager with responsibilities for a team across Europe, Africa, the Middle East and India, has three grown-up children and four grandchildren.