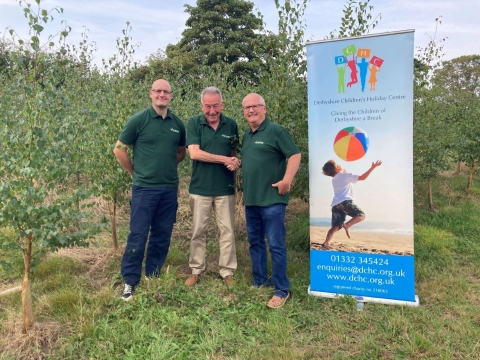 A tree growing enterprise dedicated to cutting carbon emissions has branched out into supporting a much-loved children’s holiday charity too.

Co-Treetment, a not-for-profit organisation founded in 2019 to help companies and individuals offset their CO2 by planting trees, has launched a new scheme to benefit the Derbyshire Children’s Holiday Centre.

The holiday centre charity has been going for 131 years and gives five-day stays in Skegness to children from all over Derbyshire who might not otherwise get a break, due to financial hardship or other reasons such as being a young carer.

It costs the charity £454 to send one child on a seaside break to “Skeggy home”, which welcomes nominated children between March and October each year.

Not only have Co-Treetment paid to sponsor a child to attend the centre, the company has also launched a new scheme which will enable people to buy a tree for £10, of which half will be donated to the holiday centre.

Simon Evans, who founded Co-Treetment with Darrell Taylor and Keith Cox, explained that he had long supported the work of the Derbyshire Children’s Holiday Centre. When working at science company Lubrizol, he chose to support the charity, donating to the centre the £500 Christine Sewell award prize money having won it for his voluntary work with children.

He said: “My wife and I have an interest in supporting young people. In the past we have fostered children, and are currently volunteering for Change, Grow, Live (CGL) as advocates and also independent visitors. We both feel that the Derbyshire Children’s Holiday Centre is a brilliant charity and have long been supporters.

“From our work with young people, especially looked after children, we know that charities like this make a huge positive difference to their lives. For five days, they get the chance of free time and normality where they can just be kids, and just be themselves. I think that is so important. When you work with young people who may be carers or may be in the care system, you realise that their opportunities for mixing socially can be very limited. Growing up is very different for them. This charity, the Derbyshire Children’s Holiday Centre, just lets kids be kids for a week and that’s great.”

Co-Treetment’s founders have bought a field at Thringstone, near Coalville, and their company offers people the chance to pay for trees to be planted there. The idea is to capture carbon through trees, which also absorb water from flood plains as well as provide a natural habitat for wildlife. Co-Treetment is also re-wilding areas of land for bees and insects to thrive. Businesses can use Co-Treetment to plant trees to replace any they need to remove from their own premises, or contribute to offsetting their emissions in another way. There are also memorial trees for people to remember their loved ones.

Simon said: “At Co-Treetment we will always put the planet before profit. Our idea is simply that if we want to make a difference to the environment and in particular to the air we breathe, the easiest and most straightforward way of doing that is to plant trees which breathe in CO2 and breathe out oxygen. Without having to buy an electric vehicle, or other expensive measures you might want to take, you can just plant a tree. We’re a not-for-profit organisation; we don’t take salaries or dividends; we only plant trees in the UK and we aim to leave a positive legacy for future generations.”

So far Co-Treetment has planted silver birch trees at its field as they are native to the UK, are very hardy, and can be planted close together whilst supporting as many as 229 insect species. Co-Treetment’s founders are now considering other tree species such as walnut, alder and rowan.

Alan Grimadell, chair of the Derbyshire Children’s Holiday Centre, said: “I am absolutely delighted with this new partnership with Co-Treetment. It’s a brilliantly simple idea to do something positive for the environment while benefiting the children who so badly need the service our charity offers. By paying ten pounds for a tree, people will be able to contribute much-needed funds to help put smiles on the faces of more Derbyshire children. We love the ethos of Co-Treetment and are extremely grateful to them for their support. It's wonderful to think that by planting trees to grow in the ground, people will be able to do something great for a child who really needs a break.”

To buy a tree and benefit the Derbyshire Children’s Holiday Centre, see www.co-treetment.com/shop/