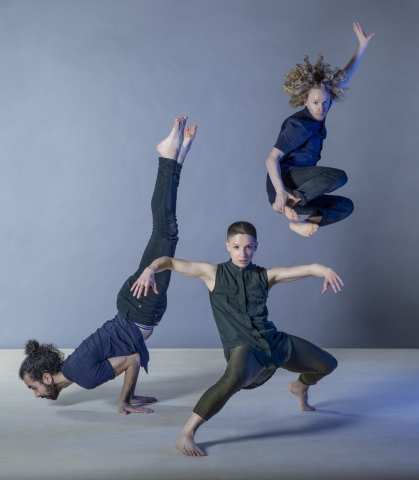 The worlds of electronic dance music and contemporary dance collide in choreographer Tom Dale’s exciting new touring programme Step Sonic which commences its inaugural tour of the UK from 17 October 2019. Tom Dale Company will be performing at Déda Thursday 17 and Friday 18 October 7.30pm.

Comprising a two-part programme, Step Sonic is a celebration of the impact of electronic dance music on the contemporary dance world. Step Sonic: Part 1 redraws the traditional choreographer/dancer/composer relationship allowing the dance itself to collaborate in the music-making process. With significant funding from the PRS Foundation, the work explores new ways to create, perform and showcase electronic music. Using an array of microphones and bespoke equipment, the dancers perform within a sonic playground which allows the sounds of their movement to be captured, amplified, processed and structured. The result is a mesmeric performance experience and a digital soundscape that has been entirely triggered by motion.

Tom Dale and Jo Wills have been collaborators for over a decade with Jo creating compositions for three of TDC’s previous dance performances; Rise, Digitopia & Roam. Through their research period for Step Sonic: Part 1, Tom and Jo have been able to experiment with and develop new sounds and instruments, as well as new compositional and choreographic processes. Sound artist and craftsman Sam Mumford joined Tom and Jo to help see the innovative project through to fruition. Together they designed a purpose-built acoustic space comprising a combination of contact and shotgun microphones, large-scale instruments, plate reverbs and a textured floor which sets the stage for the dancers to effectively become ‘the band’. The dancers are joined on stage by Wills, and while the amplified space captures the sounds of the dancers’ breath, their physical effort and the sound of their bodies impacting, Wills samples and processes these sounds in real-time creating a completely unique soundscape live at every performance. Step Sonic: Part 1 represents a new way of creating music from dance and a new way of creating choreography which foregrounds sound creation, not just movement in the choreographic process.

Part 2 of the programme sees the premiere of Ellesha Drennan’s Resonance of Air. The new work takes the surprising rhythms of bat echolocation which punctuate the score for a virtuosic display of visually articulated echoes. American singer-songwriter Janelle Monae has provided the inspiration for Jamaal Burkmar’s choreography; soulful rhythm and blues, funk and pop combine with classical influences in an eclectic fusion of influences. Completing the programme is Tom Dale’s solo Surge showcasing furious urban contemporary dance in an adrenaline-charged and awe-inspiring performance featuring one of the UK’s rising stars Jemima Brown.

Tom Dale Company (TDC) is one of the UK's leading contemporary dance companies. In 2018 TDC was made a National Portfolio Organisation of Arts Council England. Combining dance, electronic music and digital media, TDC is a leader in its field, producing world-class work which is simultaneously bold, exciting and constantly evolving. Its award-winning participatory activities for young people deliver exceptional transmedia programmes across Nottinghamshire and further afield. The synergy between dance and the digital arts is the major artery pumping through TDC’s practice and is woven into all of the company’s programmes of work. The company’s vision, through its collaborations with the digital arts, is to re-imagine dance and to explore new ideas, aesthetics and techniques with an exceptional team of dancers, digital artists, electronic musicians, poets, writers, designers and visual artists.