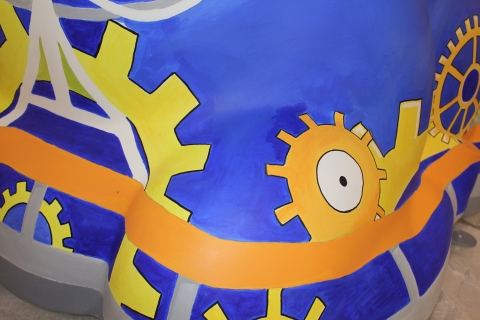 Long-established law firm Timms Solicitors have expanded their relationship with the University of Derby by teaming up with a former graduate as part of The Derby Ram Trail.

Timms are sponsoring one of the ram sculptures which will create a walking tour of the city centre this summer. Rescheduled from last summer, The Derby Ram Trail is being brought to the city by Derby Museums, in partnership with Wild in Art and is an amazing public art sculpture event with 30 individually painted 5ft tall Rams, threading through the city centre between May 27 and August 22.

Timms, whose relationship with the University of Derby includes sponsoring its Network of Entrepreneurs initiative, have chosen their design created by Derbyshire-based fine artist and teacher Stephanie Coley who, since graduating in 2001 has exhibited and sold her artwork throughout the UK.

Stephanie has drawn on the famous ‘Orrery’ painting by Joseph Wright of Derby for her design.

She explained: “I remember as a teenager visiting Derby Museum and Art Gallery where I stumbled upon the Joseph Wright Collection and was particularly fascinated by the Orrery.

“The painting really captured my imagination and I always make a point of returning to see it and the rest of the collection in the gallery whenever I am near the museum.

“This was therefore the natural inspiration for my design and I hope, more than anything, that visitors to The Derby Ram Trail will be equally as inspired to also visit the museum and the Joseph Wright Gallery to see these incredible paintings for themselves.”

Stephanie started painting in her late teens and eventually went to university aged 29.  She mainly specialises in portraiture mixed media collage art and pen and ink drawing and was keen to get involved in The Derby Ram Trail having been involved in a similar project in Liverpool ten years ago.

She concluded: “As a local artist, I very much wanted to be involved in this city-based trail which will be just the boost that we all need after such a difficult year.”

Timms Managing Partner Fiona Moffat continued: “We have had a long association with the University of Derby so we were particularly delighted to be introduced to Stephanie and her work on the sculpture is simply awe-inspiring.

“As a law firm that has been rooted in the city and surrounding area for more than 125 years, we are proud to be supporting the local community where our staff and clients live and work.

“As well as sponsoring our own ram, we are therefore looking forward to engaging with all the other businesses across the Cathedral Quarter to maximise the impact that the trail will have on the historic and cultural heart of the city centre.”