Students Union President Aims To Give Students a Greater Voice 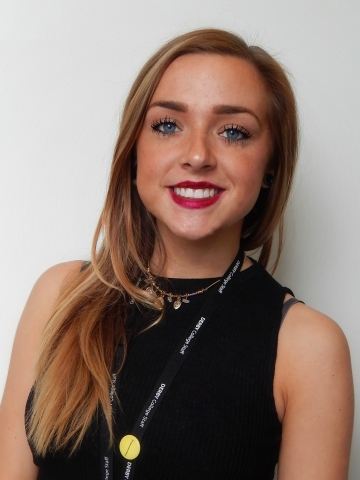 The President of Derby College Students Union (DCSU) has been elected to join the National Union of Students (NUS) National Executive Committee where she will be involved in developing and influencing policy that affects the 4.1 million Further Education learners in the UK.

Charlie Baker (19) was elected for the one-year post to lead DCSU after completing her Health and Social Care course at the College with triple distinctions stars.

One of her key objectives as DCSU President is to increase participation amongst learners from under-represented groups such as ethnic minorities, gay, lesbian and transgender and those who are in or have been in care – a subject which is particularly close to her heart.

Charlie was in a series of care and foster homes from the age of six until she was 17 and now lives in supported housing in Long Eaton.

As well as raising the profile of issues facing young people who leave care within College, she has recently been appointed as a Young Ambassador with Inspiring Voices in Derbyshire – part of a national scheme run by The Fostering Network.  In this role, she will be working with young people in care to help them be involved in influencing how services are delivered.

She has also been nominated for an award from Derbyshire County Council on Friday November 20 in recognition of her achievements in graduating College and her appointment with DCSU and now the NUS. She previously won the Celia Pain Award at Friesland School for her volunteering work, school council and youth forum involvement and her achievements in gain 14 A* to C grades at GCSE.

She said: “I was delighted to be voted President of Derby College Students Union and it is great to now have a national role to represent the views and highlight the issues facing College students throughout the UK.

“My role at College is equally diverse but my key objective is to ensure all students have a greater voice and are able to engage in engage in life changing opportunities whilst being supported to reach and exceed their potential.

“I am particularly passionate about ensuring that the 200 care leavers who are currently at the College receive the support they need.

Charlie continued that moving into the adult world and living independently could be a very isolating and frightening experience.

“Although I have had a lot of support from family, friends, social workers and teachers, I don’t think a lot of people appreciated how difficult it is to have the responsibility of living on your own, juggling part time work and college and managing such things as finances at a young age.

“I felt like I was an older student because I had had difficult and different life experiences to other people on my course.

“My childhood was effectively taken away from me and I did put walls and barriers up because I felt vulnerable.

“College life however helped me to grow up and learn how to have a voice in a positive way.  My role in College and now nationally gives me a chance to speak up for other people who are vulnerable in different ways.

“A particular issue for care leavers is that they are at risk of dropping out of education because of financial difficulties and the challenges of juggling different aspects of their lives.  It would have been easy for me to slip into that mould but I was determined to succeed.

“I gained top grades in my course at Derby College and thoroughly enjoyed it.  It changed my life and opened me up to a new and brighter world with an increased awareness of the issues within it.  I also felt empowered that I was gaining the skills needed for a better tomorrow for everyone.

“Education is the key and, through my DCSU and NUS role, I have the opportunity to hopefully make a difference and empower learners of all ages and backgrounds.”

Derby College Chief Executive Mandie Stravino added: “The Derby College Students Union has an important role in College and works as part of the management team to ensure that all learners gain the most from their time here.

“We are extremely proud of Charlie’s commitment to her work both in College and now in the national arena.

“She is an inspiration to young people whatever challenges they have faced in their lives.”