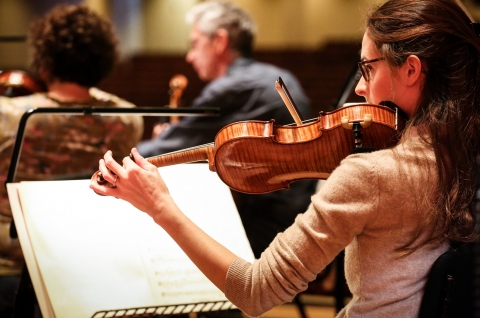 Sinfonia Viva are back to put the glamour, glitz and flare into New Year’s Eve with their sparkling performance at Nottingham’s Royal Concert Hall which has been popular with local audiences for more than 25 years.

The Gala Concert will be a double cause for celebration for the orchestra – marking the end of its 40th anniversary year.

Promising a night of popular classical favourites, Sinfonia Viva will again be under the baton of Nicholas Kok and this year will be joined by star violinist Braimah Kanneh-Mason. Braimah is a member of Nottingham’s internationally-renowned musical family who are patrons of Sinfonia Viva, and will make his debut with the Orchestra – following in the footsteps of siblings Sheku and Jeneba who have previously performed at the annual concert.

Braimah will be performing Meditation from Thais by Massenet, Schindler's List by John Williams and Zigurnerweisen by Sarasate.

To mark their 40th Anniversary, Sinfonia Viva commissioned internationally renowned composer and violinist Preetha Narayanan to create a new work, and the programme will include the second performance of her amazing piece, Drifting Tides.

The piece explores inner connection and mankind’s relationship to nature – capturing the ebb and flow of the tide, represented through beautiful melody and the interplay between instruments depicting the mysteriousness of the sea and the creatures below.

The programme also includes classical favourites such as Walton’s Crown Imperial, Elgar’s Enigma Variations, the stirring Fantasia on Greensleeves by Vaughan Williams and upbeat waltzes from the ever-popular Strauss alongside well-loved film scores Vangelis’ Chariots of Fire and Rodgers and Hammerstein’s The Sound of Music.

“Not only is the Gala Concert a fitting way to say farewell to 2022, it will also mark the end of a very special year for everyone associated with Sinfonia Viva – our 40th anniversary.

“During that time, we have entertained audiences including New Year’s Eve devotees who return year on year alongside new concert goers who are discovering the magic of Sinfonia Viva for the first time.

“We are particularly pleased to be joined this year by the fantastic young violinist Braimah Kanneh-Mason and are proud to have the opportunity to showcase such a well-known talent in the orchestral world – especially in his home city of Nottingham.”

He continued: “As always, we are looking forward to creating a wonderful party atmosphere with an evening of beauty, spectacle and theatricality that will include a selection of well-loved show tunes, popular classical music, and Sinfonia Viva’s special 40th Anniversary commission.

“And, of course, New Year’s Eve wouldn’t be the same without a selection of favourites from Strauss to whisk you away to the opulent Viennese ballrooms.

“With the always popular 6pm start time and 8.15pm finish, our concert is a wonderful addition to any New Year’s Eve celebrations, and a fitting way to close our 40th Anniversary Year.”