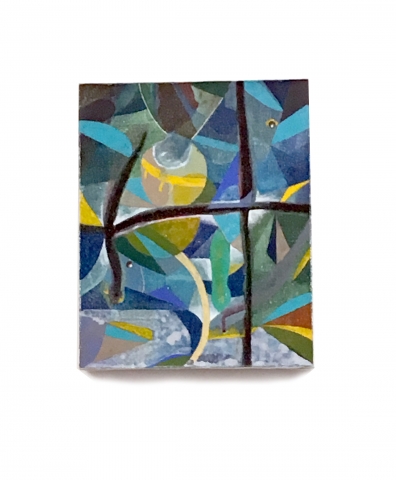 Acclaimed artist David Manley has donated one of his land and seascape-inspired paintings for a silent auction to support the community engagement programme at Déda – the city-based organisation that aims to enrich people’s lives through dance and the arts.

The 15” by 12” painting entitled ‘Cape Poem’ was recently on display as part of the ‘A Riotous Assembly’ exhibition at Déda in Chapel Street and would usually sell for around £120.

The painting, created using acrylics in glazes laid over a gesso ground, will be put into a silent auction on Tuesday December 3 which is the national ‘Giving Tuesday’ – an annual campaign to support charities.

Bids can be placed by email, via social media or in person at Déda’s box office until 5pm on Friday December 20. The winner of the silent auction will be announced w/c December 23 and will then be able to collect the painting w/c January 6.

Jess Boyle Head of Development at Déda said: “David Manley’s work is widely acclaimed and I am sure that there will be a great response to the silent auction.

“Déda is a charity and, as such relies on grants and public donations to continue its valuable work.

“We are therefore extremely grateful to David for supporting Déda’s Little Steps Big Change campaign which brings dance, circus and art to children and young people from disadvantaged communities in Derby.

David Manley continued: “Having seen Déda’s work in action, I am proud to be able to support their fundraising efforts through the silent auction.

“Money raised will support their great work in local communities and I am pleased to have the opportunity to give something back to the organisation.”

Silent auction bids can be made by email to marketing@deda.uk.com, over the phone on 01332 374667, via social media channels or in person at the Déda box office in Chapel Street.

Furthermore, Déda will hold a 12 Days of Christmas raffle between November 11 and December 23.  All donations made online and in person to the organisation will be entered into a raffle to win one of 12 prizes in the run up to Christmas.

For more information about the silent auction, raffle and all the other events, exhibitions and performances at Déda, please visit www.deda.uk.com