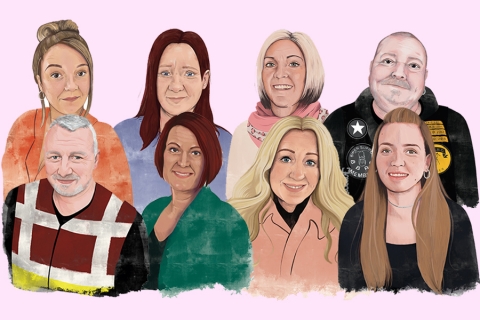 A young artist, volunteer motorbike riders, and food parcel co-ordinator are amongst eleven community members crowned Shine a Light Community Heroes by local arts charity First Art.  These heroes are the subject of a series of portraits and new film to honour them. The awards recognise the efforts and extra mile these people and organisations have gone for communities in Ashfield, Mansfield, Bolsover and North East Derbyshire during the Covid-19 pandemic.

Last November, a campaign was launched by First Art asking people in Leamington in Ashfield, Bellamy Road in Mansfield, South Normanton in Bolsover, and Clay Cross in North East Derbyshire to nominate those in their community that had gone above and beyond to help.

Nominations were received for all sorts of selfless acts that people and groups had taken upon themselves to try and help others during these extraordinarily tough times. Winners were selected from each area by a panel of judges comprising of community representatives.

First Art is delighted to announce the Shine a Light Community Heroes are:

“We had a great response to Shine a Light. Reading the nominations was extremely humbling and reinforced why we came up with campaign" said First Art’s Director, Karl Greenwood.

“Having spoken to local communities, we heard how important community is at times like this and the amazing things people were doing to help others, so we decided to ‘shine a light’ on this.

“We are delighted to be able to award the Shine a Light Community Heroes but all those who were nominated should be immensely proud of what they have done for their communities. They all play a vital part in what makes communities so important and so special,” added Karl.

Amongst the Heroes’ stories were those such as Gavin Gill from Clay Cross. He was furloughed from his job so he took it upon himself to train up and became a volunteer for the blood bike team, delivering blood, organs, and plasma to hospitals across the county.

Simon commented: “I think people and their families, friends and communities are the most important we should consider in life… Communities are a network of people who can be strong, caring and quite wonderful. Small ideas can become huge and, yes, life changing.”

Linda Smith from Leamington has been a leading light within the 'Let's All Eat' Covid-19 food parcel response. She personally delivered hundreds of food parcels within the Sutton-in-Ashfield area to make sure families could eat.

Young artist Nicole Lander, also from Clay Cross, created an art piece depicting all key workers and the local area. She donated all the proceeds (£2,150) to the NHS.

Shelly Godfrey from Bellamy Road, Mansfield was awarded for the work she has done to encourage everyone on the estate to help with cleaning up, litter picking and tidying their gardens to help “Make Bellamy Beautiful”.

Specially commissioned portraits of each of the Shine a Light Community Heroes have been created for First Art by Nottingham-based illustrator Liv Auckland. These portraits have been used in a short film telling the Heroes’ stories to share across the First Art areas of Ashfield, Mansfield, Bolsover and North East Derbyshire.

The film will also be taken out on the road on a mobile digital billboard. Over the course of this week, people queuing at selected supermarkets will be able to catch the film as they wait to go in for their shop, watching from a safe and secure distance. It is also planned to have the film playing in shopping areas as Covid-19 restrictions are lifted.

All the portraits, the film and more information on the winners and why they were nominated can all be viewed online at www.firstart.org.uk/shinealight.

The Shine a Light film is available at https://youtu.be/qhA179xpY5E.