In search of the Arctic’s Northwest Passage 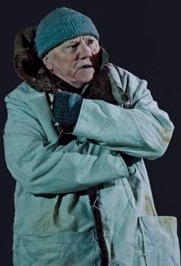 A local actor and musician are joining forces in aid of Friends of the Peak District to tell a tale of one man’s journey in search of the fabled Northwest Passage. Human interest in the Arctic goes back centuries and this fascinating story, though dating back nearly 200 years, releases secrets from the unknown land that are still relevant today.

Observations from satellites, sensors and people who live there tell the same story – the Arctic climate is changing. It is changing faster than the rest of the world; warming at a rate of almost twice the global average and summer sea ice rapidly disappearing.

Our fascination with this most inaccessible and unknown place on our planet is not a 21st century phenomenon.

The search by Europeans for a northern shortcut by sea from Europe to Asia began with the voyages of Christopher Columbus in 1492 and continued through the mid-19th century in an attempt to discover a commercial sea route north and west around North America.

When it became apparent that there was no route through the heart of the continent, attention turned to the possibility of a passage through northern waters, known as the "Northwest Passage”.

Explorers believed that an open water route close to the North Pole must exist and this belief led to numerous expeditions into the Arctic. Many of which ended in disaster.

By 1845, the combined discoveries of all of the expeditions had reduced the relevant unknown parts of the Canadian Arctic to a quadrilateral area of about 181,300 km2 (70,000 sq mi). It was into this unknown area that Sir John Franklin was to sail. The distance to be navigated was roughly 1,670 kilometres.

Now in the 21st century, major changes to the ice pack due to climate change have stirred speculation that the passage may become clear enough of ice to permit safe commercial shipping for at least part of the year.

But the Arctic remains one of the world’s uncharted regions, for reasons which are obvious: in winter the pack ice is more than 10ft thick and covers a vast expanse of sea, and even in summer huge slabs and bergs are constantly drifting. This constitutes a formidable obstacle even to nuclear icebreakers.

The Arctic Ocean is the smallest and shallowest of the Earth’s oceans, and is rich in marine and bird life. The polar bear and the melting ice are central to the narrative of global warming that dominates our times – to see these for yourself will add to your knowledge and heighten your awareness of what’s at stake.

According to travel experts, there is something dreamlike and beautifully bleak about Arctic landscapes, whether you stay “south” in the pine forests and tundra landscapes of Alaska, Canada and Russia or head for the icecaps of Spitsbergen and Greenland. For centuries, only indigenous settlers could survive here but now modern traveller can visit the emptiest, loneliest, coldest place on the planet.

To illustrate our fascination with the Arctic and tell the tale of one man’s journey to the end of the earth and deep into his own mind, local actor David Frederickson, is to perform The Unknown Land - a play for one actor and many characters. It is a compelling tale of extreme survival in 1840. The race to discover the fabled North-West Passage over the pole to the Pacific, gripped the public imagination.  A man joins a ship bound for the far north. His experiences on the voyage, the loneliness, the merciless cold, change him forever.

Keith Kendrick (Ashbourne-based folk-singer and concertina maestro) provides the music in a story inspired by true accounts of nineteenth century Arctic exploration, Inuit mythology and the fatal attraction of the Polar Regions.

“A terrific performance in a really fascinating play full of wit and love that I didn't expect from the title and subject matter. If it's not the most unexpectedly joyous night out I'll have this year it'll do to be going on with.”

In aid of Friends of the Peak District