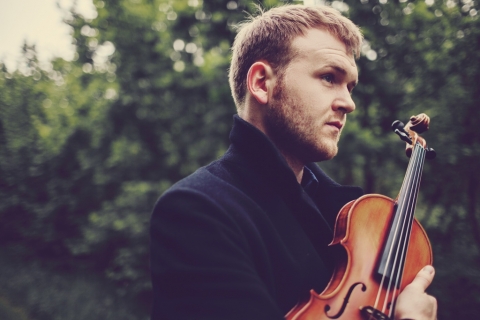 Sam Sweeney, BBC Radio 2 Folk Musician of the Year 2015 and fiddle player in folk super-band Bellowhead, is taking his show – Sam Sweeney’s Fiddle: Made In The Great War on the road one last time in June 2017.

After two triumphal tours in 2014 and 2015, playing to packed houses the length and breadth of England, Sam, together with Bellowhead bandmate Paul Sartin and acclaimed concertina player Rob Harbron, will appear on stage with award-winning storyteller Hugh Lupton to tell the incredible story of a violin that lay unfinished in a manila envelope for nearly a century.

Ten years ago Sam Sweeney bought a violin in Oxford.  It had all the appearance of a new instrument but the labels inside gave the date 1915, the name Richard S. Howard and the words ’Violin No. 6, Made in the Great War’

Research by Sam's father, Chris, revealed that the violin had been started, but never finished, by an amateur luthier and some-time music hall performer from Leeds called Richard Howard.  After joining the British Army in 1915 at the age of 35, he was killed two years later at the battle of Messines near Ypres.  ‘Violin No 6’ had been left unfinished in his workshop.  The pieces were placed in a manila envelope and eventually wound up in an auction house almost 100 years later.  The parts were bought, and the violin was finally finished, by luthier Roger Claridge in 2007.  The fiddle was then placed in the window of his Oxford music shop where it was spotted and bought by Sam.

‘Working on this show has completely changed the way that I see the First World War’ says Sam. ‘By looking at it through the story of one man, I have begun to understand so much more about war and its impact on people’.

Sam's show brings the reality of the First World War to life through the story of an ordinary man, his family and his comrades using story, music and film as well as playing the actual fiddle that Richard Howard started but never had the chance to finish.

Since taking the show on the road in 2014, another Richard Howard violin, ‘No. 2’, has come to light, together with pictures and memorabilia of Richard himself.  The story behind this fiddle continues to unfold bringing previously unknown descendants and relatives together for the first time at shows.