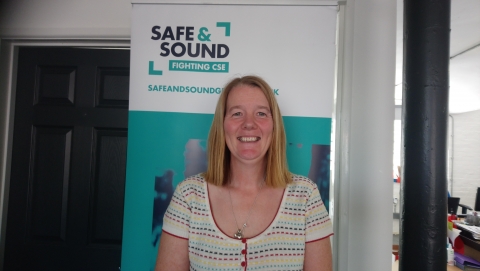 Specialist child exploitation charity Safe and Sound has expanded its work over the past year to provide a lifeline of emotional and practical support to some of the most vulnerable children, young people and their families across Derbyshire.

The charity’s annual performance report has been published this week ahead of National Child Exploitation Awareness Day (Thursday March 18) and highlights the impact of the pandemic on its work.

Safe and Sound is part of the NWG national network which spearheads the awareness raising day every year and #CEADay21 aims to highlight the rising tide of child exploitation including sexual exploitation, coercion to run drugs through County Lines, trafficking and modern slavery.

Safe and Sound’s workload has increased by 50% since the first lockdown with 150 boys and girls aged as young as seven who are victims of or at increased risk of child exploitation receiving one to one and group support.

Thanks to successful funding bids and the generosity of local businesses, groups and individuals, the team has expanded to provide specialist support to children and young people who have learning difficulties and disabilities.

Around 30% of the young people supported in the past year have identified special educational needs – increasing their vulnerabilities to grooming and exploitation and the charity has worked in partnership with a number of specialist support schools, charities and other youth organisations to support their young people.

This expansion is in recognition of the effect of exploitation on the wider family and that circumstances at home can sometimes make young people more vulnerable to being targeted by perpetrators both online and in person.

Families supported are from a wide cross section of local communities particularly in Derby city, Erewash and South Derbyshire including new and emerging communities such as those with a Roma heritage.

As well as one to one and group support, a key objective for Safe and Sound has continued to be to raise awareness across Derbyshire of the dangers of exploitation facing young people including sexual, drug lines, modern slavery, trafficking and radicalisation.

Most of the education and awareness workshops have had to be delivered virtually but engagement has included the online chat facility on the charity’s new website www.safeandsoundgroup.org.uk and through presentations with parents, professionals and young people.

In addition, Safe and Sound will be holding a number of online awareness raising events on Thursday March 18 to mark National Child Exploitation Awareness Day.

This will include members of its parents peer support group discussing the role of the police with a senior officer, a live webchat facility manned throughout the day and online awareness sessions with different groups of young people.

Last summer Safe and Sound returned to its grassroots ethos and introduced an outreach programme.  Between June and December 2020, young and support workers engaged with 746 children and young people.

On nine occasions, they shared information and intelligence with partner agencies leading to a police investigation into County Lines and action taken on three safeguarding issues.

Safe and Sound CEO Tracy Harrison explained: “As Covid-19 developed, the risk of child exploitation had never been greater with children not in school, changes to their routine, increased stress and isolation.

“Our immediate concerns were that young people were more vulnerable to online grooming due to them spending more time on social media and games channels.

“We reviewed our work to ensure we could respond effectively despite the restrictions on interaction and recruited new staff to meet the increased demand.

“As well as working with young people to prevent and protect them from exploitation, we have helped them with wider issues such as wellbeing and mental health, bereavement and schoolwork – including providing laptops, tablets and internet support.

“Children and young people with special educational needs are not only more vulnerable to grooming but many have also struggled to understand the changes to their routine caused by the pandemic.

“Our new specialist support worker has therefore successfully developed an adapted support programme for young people and their families.

“She has received fantastic feedback from the families and partner schools and disability groups and we know our work is making a difference in protecting young people from serious harm.

“I am particularly proud of the additional support we have been able to provide to the wider families of young people referred to us as at risk of exploitation.

“This support ranges from help with housing and access to foodbanks to ease the additional strains on family relationships to helping families whose first language is not English to understand the help available to them during the pandemic.

“In conclusion, we cannot achieve what we do on our own and our collaborations and partnership working with other charities, organisations and statutory agencies has had a greater impact.

“I am extremely proud with how the whole team has worked proactively and collectively to overcome the challenges of the pandemic and ensure that children and young people receive the one to one and group support that they have desperately needed in these unprecedented times.”

To attend an awareness session on the March 18 2021 between 11am -12pm, please register your interest at info@safeandsoundgroup.org.uk.

Safe and Sound’s specialist family support workers are currently helping a number of families and one of them is a Derby family who have been on a downward spiral for many years – resulting in mounting debt, a chaotic household and proceedings starting to place the children into care.

They were referred to Safe and Sound over fears from police and social workers that the two older daughters aged 14 and 12 were being groomed by older men.  The ten-year-old youngest daughter was also regularly engaging with strangers on social media with little or no privacy settings.

The parents did not know about the dangers facing their younger daughters so the first task was to raise awareness amongst the whole families of the dangers of grooming and exploitation.

Now that they know about exploitation and the dangers, the parents being far more confident to set boundaries around where the girls go and who they meet both in person and online.

The family support worker has also helped the family start to get back on their feet: addressing rent and bills arrears, clearing years of hoarded rubbish out of the house and agreeing to the social housing landlord doing vital repairs.

She has ensured the children have new beds, uniforms and toiletries to overcome the stigma and isolation they were experiencing at school and that the family had proper furniture such as a table and chairs where online schoolwork could be done and family meals enjoyed.

The mother, who suffers from anxiety and depression, has also been supported to improve her confidence and take responsibility for her own health and that of her family such as dental appointments.

Safe and Sound have also helped mediate more positive communications between the family and social care to reduce the risk of these children being placed in care as has previously happened with other siblings in the past.

All three girls have engaged in positive activities with Safe and Sound ranging from baking to table tennis and are doing much better at school – resulting in improved behaviour.

Simple things have also made a huge difference.  Rather than going out and potentially falling prey to perpetrators, the girls now play board games and enjoy spending quality time as a family – making them far less likely to forge unhealthy relationships outside the home.

There is a much calmer atmosphere at home and family therapy has helped them to better communicate.  There is still a long way to go and Safe and Sound will support the family as long as needed.

Families coming to the UK from Eastern Europe in search of a better life are particularly vulnerable to exploitation for a number of reasons and Safe and Sound is a key part of the city’s successful New and Emerging Communities Project.

The Roma community face some of the greatest challenges not least because they have a deep-seated mistrust of statutory authorities and the UK culture is totally alien to their previous experiences on the edge of society in their home countries.

One of the families being supported by Safe and Sound is however turning a corner in a number of ways thanks to the patience and perseverance of the charity’s specialist New and Emerging Communities support worker.

The single-parent family was first referred to Safe and Sound following reports that one of the three girls in the family was being targeted and groomed by older men. The support worker has been helping the 17-year-old girl to recognise that she was being groomed and to raise awareness amongst the whole family of the dangers.

Their younger brother, who is 13 and struggles to make friends, is also very vulnerable to getting involved in gangs who have started to lure him in with promises of money, gifts and a sense of belonging.

The family are trapped in sub-standard housing – which Safe and Sound is trying to rectify - and exist on a very low income.

Language and cultural barriers as well as a chaotic home life have meant that the young people’s attendance at school has been very poor.

During the pandemic, Safe and Sound and partner agencies have ensured that they have the computers and wifi needed to engage in virtual learning and the support worker has brokered better communications with their schools and training providers.

This combined approach has led to the family’s better engaging with education as they feel more positive and comfortable with where and when they can do their online lessons and course work.

The younger teenagers have also welcomed the chance to do positive activities with Safe and Sound  - such as boxing and table tennis – which has given them a focus and reduced their vulnerabilities to grooming gangs.

Wider family support has included accessing benefits and legal advice and supporting the mother to receive a learning disability assessment which have all contributed to building the family’s trust and improving relationships with authorities.

There is still a long way to go but their support worker is building up trust with the family and are starting to better recognise the dangers that they all face from perpetrators looking to exploit them for their own gains.

For more information about the work of Safe and Sound and how to support the charity, please visit www.safeandsoundgroup.org.uk and follow on social media channels.