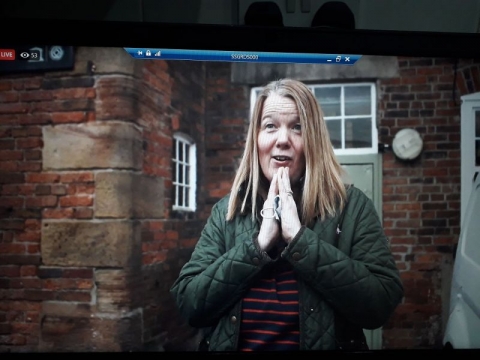 Tracy Harrison has been recognised in the Derbyshire Live Heroes awards.

Tracy was presented with the Lifetime Achievement Award by Safe and Sound’s chair of Trustees Allen Graham.

He nominated Tracy for the award in recognition of her long career with Derbyshire police, her commitment to local charities and her success in transforming Safe and Sound over the past 18 months.

Safe and Sound supports children and young people across Derbyshire who are victims of or at risk of child exploitation, providing help to their families and raising public awareness of the dangers facing young people from perpetrators both online and in person.

Allen Graham said: “Tracy’s drive and passion for improving services has transformed Safe and Sound from a charity that had fallen under the radar to now being widely valued for the vital work that it achieves in local communities across Derbyshire.

“Her coaching and mentoring skills have supported the team through a challenging transition from being dependent on local authority contracts to developing into an innovative organisation that provides grassroots support for local young people and their families and raising public and professional awareness of child exploitation.

“These achievements, coupled with Tracy’s long and successful career in Derbyshire police and her many years working with and supporting local charities in the county makes her a very worthy winner of this award and I am delighted that the judges agreed.”

Tracy added: “I was incredibly shocked when Allen asked me to meet him at our office in Darley Abbey – only to be met by the Derbyshire Live camera crew to record the presentation which was then shown at the online awards ceremony.

“This has obviously been a challenging year for the whole team at Safe and Sound. We have seen a 50% increase in the number of young people and their families who have needed our help and support and faced restrictions on how we have been able to provide that support due to the pandemic.

“Despite these challenges, we have expanded the scope of our work and has been recognised with a clutch of prestigious local and regional awards throughout this year.

“Such recognition is an important part of our commitment to raise awareness of child exploitation and the dangers facing children and young people in our local communities - whether that is sexual, County Lines, Modern Slavery, trafficking or radicalisation.”

Mother-of-two Tracy Harrison has lived in Derby since leaving her home town of Scunthorpe at the age of 17 due to a bereavement and some family issues. She started her working life on a job training scheme in a sports shop and became the city’s YTS of the year in 1986. In 1987 she achieved her dream of becoming a police officer.

Her career included uniform and CID duties at all levels from Constable to Superintendent with various responsibilities including Commander of firearms incidents, terrorism deployments and public order e.g. protests and football matches

She was Chair of the Gender Agenda support network and previous Vice Chair of Black Police Association and a Blue light Mental Health Champion.

In 2017 she led the largest manhunt for a serial rapist leading the media, communications and engagement strategy. This led to the successful arrest of the offender who received a 22-year prison sentence.

In 2018 she oversaw the investigation leading the national media and engagement into the murder of a 100-year-old lady in Derby after a street robbery went wrong and was a firearms commander for firearms plans for a street shooting where over eight persons were arrested and successfully brought before the court.

When she retired in February 2019 aged 51, she knew the next chapter in her life would be working for a grassroots charity that supported children and young people.

She was appointed CEO of Safe and Sound in May 2019 and is responsible for strategic direction and overseeing all aspects of the services provided in local communities.

Her communication skills and strong network has enabled the charity to attract funding from a far wider range of grants and trusts, corporate support and through individual fundraising under the banner of the Butterfly Appeal. This has enabled grassroots support to be extended to youth services, family support and even wider education and awareness raising in local communities.

Her vision has led to the establishment of a team high-profile ambassadors and, for the first time in its history, a growing band of volunteers. Tracy has also actively sought and brought on board a new chair and more trustees who bring a wider range of skills to oversee and support the organisation.

Tracy is also chair of trustees of another local charity, Umbrella, and trustee safeguarding lead for Derby County Community Trust – illustrating her passionate that young people should be nurtured into adulthood.

Since Tracy has taken up her position at Safe and Sound, she has played a pivotal role in the development of the Stronger Communities Board and the Youth Alliance. Tracy has actively developed partnerships with other local charities and developed networks to allow collaboration on projects. Tracy has brought a wealth of knowledge in the Safeguarding arena to the sector and has acted as an advisor to other organisations.

For more information about Safe and Sound and how to support the work it does, please visit https://safeandsoundgroup.org.uk/.