Ringing the changes at Buxton Fringe 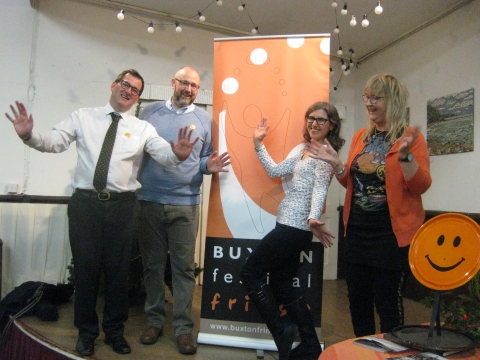 A new team (pictured) assembled at Buxton Fringe’s AGM at The Green Man Gallery on November 21 as Stephen Walker took on the role of Fringe Chair while Gary Bellas became Treasurer and Gaye Chorlton was appointed Secretary. Maria Carnegie was re-elected as Vice Chair.

Outgoing Fringe Chair Keith Savage was unable to attend but sent a Chair’s Report in which he looked back on a spectacular Fringe40 event that was “almost 20% bigger than anything we had ever seen before” with significant ticket sales increases. He added: “If you did anything at all to make Buxton Fringe 2019 happen then please accept our thanks. From displaying posters to sweeping streets, to opening venues, to daring to perform in front of strangers… we could not have done it without you.” He concluded: “Being part of the Buxton Fringe was one of the best things that I have done.”

New Chair Stephen Walker thanked Keith for his tireless work, innovations such as Fringe at Five and his personal support in the last few months. As someone who had joined the Fringe many years ago, Stephen said he now goes to “more shows than Sam Slide” and loved “the sense of openness and possibility of the Fringe”. He added that he hoped to continue “that spirit of openness to new ideas and ways of doing things” with the help of his committee of “active, intelligent people”.

The AGM also heard from Friends Co-ordinator Jeanette Hamilton who thanked the Fringe Friends for their significant contribution to Fringe Funds and asked existing Friends to recruit two more Friends each in order to keep boosting the numbers.

There was praise from the Fringe from attendees and from The Green Man Gallery’s Caroline Small who spoke as a managed venue organiser saying: “I feel wonderfully supported. The marketing that is out there is second to none. I love the buzz that comes from knowing there is a network of people and we are all working towards something.”

Several new people were welcomed to the Fringe committee. People may join at any time so anyone still wanting to become involved should contact info@buxtonfringe.org.uk for further information.

Next year’s Fringe runs from July 1-19 with online entries opening on December 1st 2019.