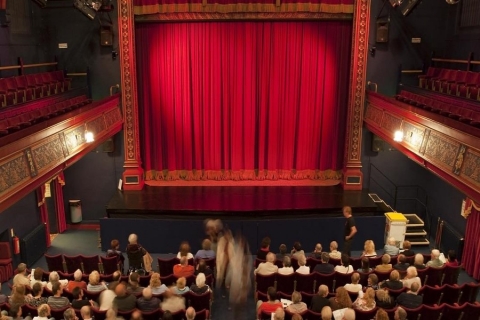 Tracie Bennett, Janie Dee and Imelda Staunton play the magnificent Follies in this dazzling production. Featuring a cast of 37 and an orchestra of 21, Stephen Sondheim's legendary musical was directed by Dominic Cooke and filmed live on stage at the National Theatre in 2017. (135min)

The true-life story of an unassuming British businessman Greville Wynne (Benedict Cumberbatch) recruited into one of the greatest international conflicts in history. Also starring Jessie Buckley and Rachel Brosnahan.  (112min)

Mick Fleetwood has assembled a stellar cast of musicians to celebrate the music that established Fleetwood Mac as one of the biggest bands in the world – the music of Peter Green. Directed by award-winning concert director Martyn Atkins, this event will feature an introduction by Mick Fleetwood. (145 min)

John O'Groats, Scotland: An elderly man, Tom (Spall), whose wife has just passed away uses only local buses on a nostalgic trip to carry her ashes all the way across the UK to Land's End, where they originally met, using his free bus pass. Unbeknownst to Tom, his journey begins to capture the imagination of the local people that he comes across and, ultimately, becomes a nationwide story. (86min)

In 18th century France, letters fly between the mansions of two bored aristocrats as they spin a web of heartbreak and ruin. It might seem like a game, but lives will be ruined and love irrevocably lost. Northern Ballet's bodice-ripping adaptation is set to Vivaldi’s The Four Seasons, played live by Northern Ballet Sinfonia. (95min)

Our Ladies follows a group of Scottish schoolgirls on a day trip to Edinburgh to perform in a choir competition. For these teens from a small town in the Scottish Highlands, it becomes a chance to escape their daily lives and run riot in the big city. With few expectations for their futures, the girls are determined to live for every moment in this raucous tale of love, life and true friendship.

Award-winning director Damon Gameau (That Sugar Film) explores what the future could look like by the year 2040 if we embraced the best solutions already available to us to improve our planet. Damon blends traditional documentary with dramatised sequences and high-end visual effects to create a vision board of how these solutions could regenerate the world future generations. (92min)

LA TRAVIATA ON SYDNEY HARBOUR (12A)