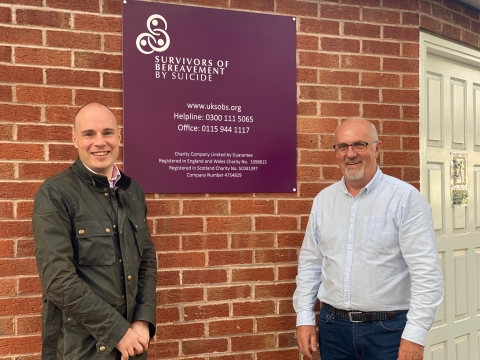 From left to right: Chris Wright and Eric Thwaites

Commercial property consultants OMEETO have secured the lease on an Ilkeston town centre property to enable a national charity to forge ahead with its expansion plans and support more people impacted by suicide.

OMEETO acted on behalf of property landlords Ilkeston Joinery to finalise the lease on the single storey offices on the corner of New Lawn Road and Wharncliffe Road which will be the new national office for Survivors of Bereavement by Suicide.

The charity offers peer to peer support to anyone over the age of 18 in the UK who has been impacted by suicide loss. It has been established in the UK for just over 30 years and have provided a much-needed service from smaller offices at the Flamsteed Centre in Albert Street.

The charity runs 54 support groups across the UK which are each attended by between ten and 50 people.  It also runs a national helpline between 9am and 9pm 365 days a year, an email support line, a virtual men’s support group entitled bereavement and an online forum.

OMEETO director Chris Wright explained that he was particularly keen to secure the premises for the charity as his own family had been affected by suicide.

“My father took his own life when I was three and it still affects our family to this day. Both my clients and I were very impressed with the work that the charity does to support people across the UK and were keen to get this deal finalised as quickly as possible.”

Survivors of Bereavement by Suicide CEO Eric Thwaites continued: “We are extremely grateful to Chris for his support in this important move for the charity.

“There are around 6,500 deaths by suicide in the UK every year and, for every person who takes their own life, around 142 people are affected.

“Having embraced the virtual world due to Covid restrictions, we are now able to reach out to and support many more people.

“The demand for our services from local authorities and health commissioners as well as the increasing number of individuals affected, continues to grow.

“By securing larger premises, this will not only enable us to expand and meet future needs but will also help generate additional income.”

Mr Thwaites continued: “We help those bereaved by suicide to support each other in a safe and confidential environment at the time of their loss and in the months and years that follow.

“Suicide changes your life forever. Life will never be normal but those impacted have to look for a new normal.”

Mark Baker, from building owners Ilkeston Joinery, concluded “Chris has made both the purchase of the property and then the search and securing of the tenants, a seamless and smooth experience.

“I couldn’t have been happier with the letting of the building to SOBS, a truly great charity, run by caring and friendly people. I would like to wish them great success with their expansion.”