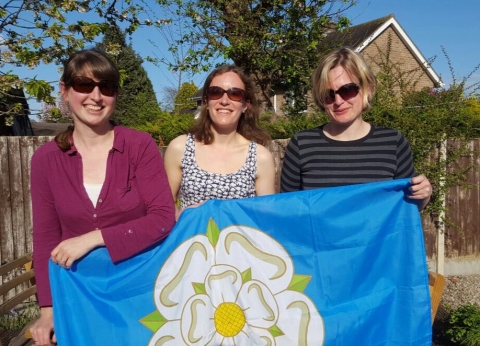 More than 300 people have already entered this summer’s Jenson Button Trust Triathlon which will be held for the third consecutive year in Derby on Sunday July 23.

Organisers, Derby-based HUUB Events, report that the largest number who have already signed up are triathlon beginners.

They will complete alongside Formula 1 McLaren Honda racing driver Jenson Button as well as seasoned and elite athletes on the day.

Race Director Claire Duffin said: “We have half the places filled so far with more than two months to go before entries close so we are delighted with the response – particularly from people who doing their first triathlon with us.

“Feedback from people entering JBTT as their first triathlon is that the shorter distances and the opportunity to race twice give them the best chance of gaining experience in this, the world’s fastest growing sport.

“Jenson and his team at the Trust have always been keen that this event is achievable for novices but equally challenging to more experienced and even elite athletes.

“That is why we have the two-legs in the event with everyone racing in the morning and then the top 50 going through to both the men’s and women’s and team finals in the afternoon with a separate race for everyone else.”

Novice entries included local people and those from across the UK and Europe.

Mark Gould (36) from Markeaton Village is amongst those who will be doing their first triathlon at the event.

“I have been involved with the JBTT for the past two years as my employer epm:technology have made the medals and trophies.

“It was suggested last summer that I should have a go and has snowballed since then and has given me a great focus to get fit.

“I have joined the HUUB Academy to help me train. I am also cycling to work whenever I can and there is no excuse not to go for a run with Markeaton Park on my doorstep. I’ve not really swam since I left school so that is something that I need to work on.

“The great thing about JBTT is that it is accessible.  The distances are short so they are achievable and it will be great to race against some of the best – including Jenson Button himself – although they will all no doubt be leaving me in their wake!”

Tanya Muller Bourges (35) will be travelling to Derby from her home in Brussels to take part in her first ever triathlon and is excited to be part of the day and to see the city.

“My boyfriend is a keen triathlete and an avid fan of Jenson Button so he suggested that we should enter together and make it the highlight of a holiday in the UK.

“I do running but need to work on my swimming and cycling skills but actually my goal on the day is to achieve the best time that I can but, more importantly, to have fun and meet some new people.”

Another option for novices is to team up with two colleagues or friends and enter the team challenge.  The Yorkshire Puddings team have done just that – made up of Nicola Ayre (34) and Susan Gillie (31) from Sheffield and Nicola’s sister Ally Anderson (32) from Shropshire.

Nicola, who will do the running leg, said: “Susan is pretty fit but Ally and I have started from scratch. It has been a good way to get motivated to do more exercise.

“The short distances are very accessible for novices like us.  Doing all three stages would be way too much for me but doing it as a team is much more achievable.

“The fact that we can do this as a team and that Jenson Button will be there makes this the perfect event for us.  We are all real fans of him and it should be a great day out.”

Everyone will get the chance to race twice. The preliminary will consist of a 200m swim in Markeaton Lake; 10km cycle from the park and on closed roads into the city’s Cathedral Quarter before returning to the park to complete a 2.5km run.

In the individual event, the top male and female performers will then go on to the finals – completing a 400m swim, 20km cycle and 5km run, with the runners up entering the wooden spoon race.

The Team Challenge participants will race again in the afternoon over the Super Sprint distance and the team with the fastest average time will emerge victorious.

The prize fund available to competitors is one of the largest for a UK based sprint triathlon. A grand total of £7,000 will be on offer, split between the male and female categories.

Back by popular demand, during the JBTT lunchtime break there will be a free to enter family triathlon in the park which is open for children aged between seven and 15, accompanied by an adult.

This consists of a 50m swim in the lake then heading out onto the closed roads for a 2.5km cycle before a 750m run – crossing the same finishing line as the JBTT triathletes.

Also in the lunch time break, this time in the city centre, there will be a children’s criterium hosted by Cycle Derby CC with young people taking part in a series of races around closed roads in the Cathedral Quarter

Spectators are invited to join in the fun.  As well as the opportunity to watch the competitors in action, a wide range of family activities will also be held at the event village set up in Markeaton Park.

The day will culminate in medal presentations by Jenson Button and a post-race party for participants with live music and locally-produced food and drink.

The event’s headline sponsor is Santander who work closely with Jenson as one of their brand ambassadors and the event is supported by Derby City Council.

To enter and for more information, please visit www.jensonbuttontri.com and, for latest news and training tips, please follow on Twitter @JBTrustTri