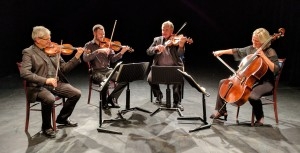 Get your tickets now from Spring Bank Arts, High Street Books and Records in New Mills and online at www.wegottickets.com

Beethoven String Quartet in A minor No 15 Op 132

A feature in every Northern Chamber Orchestra season is the regular appearance of the principal players as the NCO Soloists. In this concert, leader and Artistic Director, Nicholas Ward, presents three string quartets by Haydn, Debussy and Beethoven.

Haydn’s G major string quartet gets it’s ‘How Do You Do’ nickname from the rising four note motif that appears at the beginning and end of the first movement. Haydn was a big fan of Orfeo ed Euridice, a work he had previously directed, and pays Gluck the ultimate compliment by borrowing the oboe theme and using it in this quartet. Following the Haydn is Debussy’s only string quartet, and his only composition to be given an opus number and key. Its four movements come together to form a work of rhythmic intensity and tonal shifts that, according to Pierre Boulez, freed chamber music from its “rigid structure, frozen rhetoric and rigid aesthetics.” The players close the concert with Beethoven’s A minor string quartet, a work of epic scale and transcendent beauty. Written only two years before his death, the piece lays bare his struggles with his own mortality – but we are left with a sense that he has come to terms with adversity and pain and as with many of his other great works, the human spirit has prevailed and even triumphed.