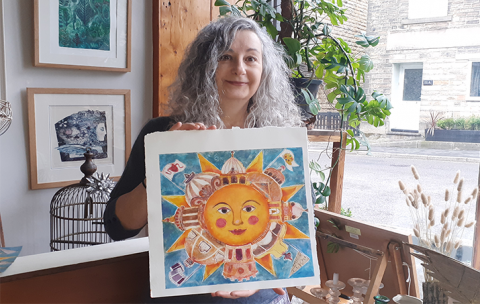 Each entry was judged anonymously by a panel including Fringe committee members and the designer of the Fringe programme. Joanna’s artwork, a vibrant collagraph print with a sun motif entitled Good Day Sunshine, was the overwhelming winner and will be used on the widely circulated 2022 Fringe printed programme and on flyers and other publicity. The artist also wins £100 in prize money.

Joanna says of her design: “I wanted to create an image that conveyed a sense of optimism and joy – it’s about the coming together of people to celebrate all the arts. The happy sun face was inspired by images of architecture around Buxton, the flags representing the Fringe festival.”

Joanna’s family members - musician brother Will Hawthorne, sister Susie Hawthorne and brother-in-law George Telfer (both actors) - have been involved as Fringe performers over the years. As a member of Peak District Artisans, Joanna has also exhibited at the Fringe in the past. More of her work and details of her workshops can be found on www.joannaallen.co.uk.

Three joint runners up were also announced, Annie Osborne with Juggler, Emma Bouchier with Fringe Fun and Kira Smith with Fringe in Glass. The Fringe hopes it may be able to use these and possibly other entries to the competition in Fringe publicity in the future. The entries will also be featured on a gallery page on www.buxtonfringe.org.uk

Buxton Fringe Marketing Officer Stephanie Billen says: “We were really delighted with the standard of entries - the creativity and ideas were much appreciated. Joanna’s winning sun design was beautifully executed, eye-catching and conveyed a lovely positive message about the Fringe. For me it really pulled at the heartstrings as we emerge from the darkness of Covid. One of our judging panel summed it up when she said it just made her smile!”

Buxton Fringe takes place from July 6-24. Full details on how to enter are on the website.