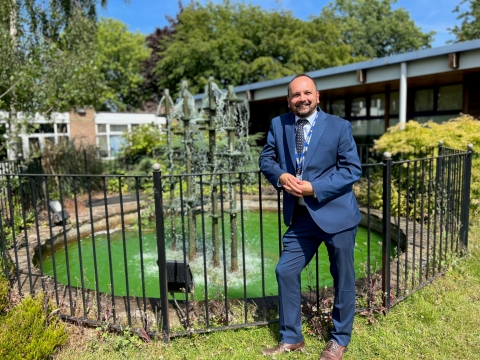 One of the city’s most historic schools has appointed a new head teacher who has pledged to serve the school and its community and commit to breaking down communication barriers.

Paul Burrows has been announced as the new head teacher of Royal School for the Deaf Derby, in Ashbourne Road, after current head teacher Helen Shepherd stepped down at the end of the last academic year.

Although the position is Paul’s first headship, he has been in education for more than 30 years, most recently as deputy head teacher of Alderswasley Hall School, a special school for children with autism, for the last six years.

One of Paul’s last roles there was to jointly lead the school through an OFSTED inspection in July 2022, which it rated as outstanding in every area. The inspectors particularly acknowledged the “ambitious curriculum”, that the teachers “precisely track what pupils know and can do” and how “teachers use their strong subject knowledge very effectively to deepen pupils’ understanding”; these were all key areas within the school which Paul led.

His first teaching job was in a mainstream school with a unit for hearing impaired children and, although Paul already has basic British Sign Language (BSL) skills, he has pledged to master the language as soon as possible. He passed his BSL 101 exam before the start of term to enable him to greet the new students when they returned.

In fact, it was a lightbulb moment during the interview process that has made Paul, who is a physics teacher, determined to break down communication barriers for every pupil.

He said: “During the interviews all the candidates were asked to sit at different tables with small groups of pupils. At first, I felt utterly helpless and frustrated that I couldn’t communicate with them but fortunately I was able to use lip reading, mime and gestures and by the end of the session we were having a full blown conversation and all laughing together.

“But those initial moments stayed with me because I felt extraordinarily vulnerable. Then I realised that this must be how deaf people feel so often in a hearing world – exposed and defenceless. That moment stirred something in me and I felt that I couldn’t allow this to happen.

“So, I hope to be an advocate for deaf people in a hearing world and create a nurturing environment where our pupils can thrive and be themselves.”

Although Paul was born in York, he has been based in the city for many years after marrying a Derby-girl and his two children attend St Mary’s Catholic Voluntary Academy, in The Broadway.

He started his new position this month, although he got to know several students, parents and staff on transition days at the end of last term as he prepared for his new role.

During these sessions he was invited to give himself a sign name – everyone in the deaf community is assigned a unique and individual sign that not only identifies them, but also encompasses their personality.

Paul added: “I was asked what I would like my sign name to be and I didn’t really know. It was suggested that I could have something like bunny or burrowing, because of my surname, but I wasn’t very keen on being named after a rabbit!

“I was sat having lunch with two secondary pupils and my BSL teacher asked them what they thought my sign name should be. They both said that I was dressed very smartly, so that has become my sign name – Smart! I’m pretty happy with that.”

Paul accepts that there are big shoes to fill, following in the footsteps of the previous headteacher Helen Shepherd. She led the school out of special measures to being named ‘good’ by Government inspectors, who also found the residential unit - and Helen herself – to be ‘outstanding’.

But Paul is at pains to point out that he will not be making sweeping changes, instead taking his time to ensure that the transition away from Helen is seamless for the school and wider community.

He added: “I knew I wanted to be a headteacher for several years, but I also knew it had to be the right school – I didn’t want to take the first job that came along, I wanted somewhere with a heart and soul.

“As part of the interview process I came for a pre visit and I was here for two and a half hours on my first look around and I fell in love with the school – even though there weren’t any pupils on site because it was late afternoon. The essence of the school felt right and the ethos and values of the staff that I met was exactly the same as my own.

“I’m also very aware that the school’s place in the deaf community is vivid and the history and heritage of the school is an important part of modern-day school life.

“This school is a family and I feel very lucky that I am being welcomed into the fold. My hope is that we will work together to continue the school’s upward trajectory to outstanding and that the nurturing and community roots that underpin the school are maintained and continue to blossom.”