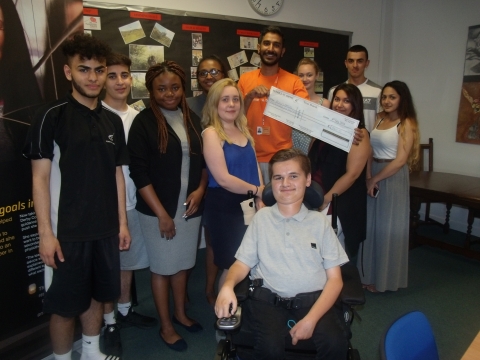 A group of sixth formers at Derby’s Merrill Academy, led by Sports student Maitham Rashid, have raised £1,020 in just a week which will be divided between two charities that support people in need across the world.

Maitham (17) was inspired to organise the fund raising events by the ethos of Ramadan and rallied his peers to support his efforts – organising a leg wax for four male teachers, a non uniform day and a cake sale. The money raised has been divided between Nottingham-based charity Muslim Hands to build three wells and the Penny Appeal to sponsor three orphans with foster homes and a school education for a year.

Maitham, who is planning to go to university after leaving school and then set up his own business, explained: “The idea for the fund raising came to me during the month of Ramadan which is a time of contemplation and supporting others less fortunate. “I was keen to support these two charities which provide vital help to vulnerable children and communities in the most need. “We take for granted what we have – whether that is clean water or a loving, caring home and a good education. “I am particularly pleased that we will be kept updated about the progress of the wells, which will have Merrill Academy plaques on them when they are finished, and will be able to keep up to date with the three young orphans whose lives will hopefully be transformed with this sponsorship. “Everybody at Merrill Academy really got behind the fund raising efforts and I am very grateful to the support of everyone including teachers, all the pupils, kitchen staff, parents and families and some local businesses including Greggs who donated cakes for the sale.”

Head of Merrill Academy Marcus Shepherd continued: “Maitham is a very inspirational young man and led the group of sixth formers admirably to raise this spectacular amount of money.”

Bilal Choudhry, Special Programmes Assistant at Muslim Hands, said: “We are very impressed with what Maitham and everyone at Merrill Academy has achieved. “This money will be vital to support communities across the world such as West Africa. “More than 300,000 children alone die from water related diseases every year but, by installing wells in villages, children’s health has vastly improved and they are also able to regularly attend school rather than having to walk many miles every day to gather water.”

Arslan Moghal from Penny Appeal concluded: “We look forward to reporting back to Merrill Academy about the progress of the three orphans who they have sponsored. “With this support, these young people will have a good home, clean clothes, food and the best education that is available which will transform their lives.”