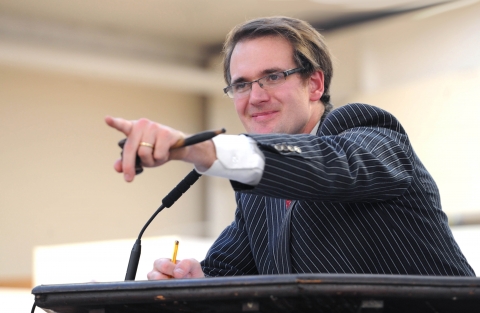 Visitors to next month’s Bolsover Antiques and Collectors Fair are invited to bring family heirlooms and car boot bargains to be valued by one of TV’s best known antiques experts.

Charles Hanson, who presents on BBC’s Bargain Hunt and Antiques Road Trip shows, will host a valuation session on Bolsover Market Place – just a short walk from Bolsover Castle – on Sunday 24 May.

A native to Derbyshire, Charles runs Hanson’s Auctioneers and Valuers in Etwall, which holds international auction sales featuring a huge variety of collectables.

“I am delighted to be taking part in the Antiques and Collectors Fair in Bolsover – an area rich in history, providing an abundance of antiques finds,” said Charles.

Organiser of Bolsover Antiques & Collectors Fair, Carole Ford, said: “It’s great news that Charles is to be involved in our event.  We’ve already had a lot of interest from exhibitors from all over the region, so we’re anticipating a big turn-out already.  We’re hoping that this will become a regular annual fair, so we’re delighted to have Charles on board in our first year.”

Bolsover Antiques & Collectors Fair is free to attend, and will be open from 10am until 5pm, featuring all types of items for every budget, from high end collectables to quirky shabby chic.  Charles’ valuation session will be held from 2pm to 4pm, and those interested in this opportunity should arrive early to avoid queuing and maximise the chance of receiving a valuation.

The event is part of the Discover Bolsover project, which has been developed following a successful bid for European Regional Development funding by Bolsover District Council.

For more information about the event and about Bolsover: