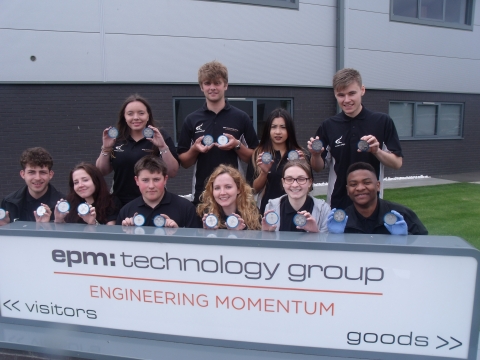 Engineering students at Derby College have produced the medals that will be sported by competitors in this year’s Jenson Button Trust Triathlon – one of the final tasks in their year-long programme with Derby advanced composites manufacturing business  epm:technology.

epm:technology are part of the Derby College Employer Academy programme – providing level three Engineering students with masterclasses, workplace visits and work experience that culminate in a guaranteed interview for an apprenticeship at the end of the programme.

The company is also supporting the Jenson Button Trust Triathlon which will be held at Derby’s Markeaton Park on Sunday July 17 and is organised by fellow Derby company, HUUB Events. The epm:technology Advanced Composites Employer Academy students spent part of their half term break at the company’s manufacturing headquarters – assembling the medals which have been manufactured using lightweight advanced composites materials.

They will be presented to all the competitors in the men’s, women’s and Smith Cooper Team Challenge races. epm:technology are also manufacturing the trophies for the event which will be presented to the winners in each category. Among the students involved in the project is Dani Johnson (19) from Chaddesden who volunteered as a route steward at last year’s Jenson Button Trust Triathlon – the first time it was held in the city.She said: “It was a brilliant day last year and I really enjoyed being involved.  Unfortunately I  am on holiday this year so I was pleased when we were asked to put together the medals so that I could at least be part of the build up to the event.”

epm: technology is one of the UK’s leading suppliers of complex and engineered composite components to the highly competitive motorsport arena including Formula One.

Managing Director Graham Mulholland continued: “Derby is the UK’s number one high-tech city so I am delighted that we are supporting this fantastic sporting event again this year with trophies and medals which have been designed and manufactured using the latest advanced composites. “They have been designed by the team here who work on the components that we supply for F1 cars so there is of course a natural link for us to be involved with the event that is headed by McLaren Honda driver and former World Champion Jenson Button. “The response from Jenson and indeed all the competitors to the medals and trophies last year was fantastic and we look forward to seeing them presented at the end of the event.”

He said: “The students have done a fantastic job creating the medals and have done us and epm:technology proud. “Several of the other Employer Academies involved with the College are planning to put together teams of three people who will tackle the Smith Cooper Team Challenge – each tackling a component of triathlon to swim, cycle and then run. “We are very grateful to the support of epm:technology, Derby College and indeed the wider business community who recognise the benefits to the whole city of such a high profile sporting event being held here.”

The Employer Academy programme is part of Derby College’s wider initiative in partnership with businesses across the East Midlands to bridge the gap between education and world of work.

More than 200 students across the College are benefiting from work experience, involvement in projects and master classes from employers.  They will be guaranteed an interview for potential apprenticeship and jobs at the companies at the end of their study programme.

Business Development Director April Hayhurst concluded: “The Employer Academy programme is an innovative way of bringing together businesses and learners to bridge the gap between education and the workplace. “Through innovative companies such as epm:technology and HUUB, learners get the chance to be involved in real projects in the workplace and gain an insight into the skills and attitudes that they will need to be successful in their future careers such as problem solving, team working and communication skills. “The Jenson Button Trust Triathlon is a great event for the whole city and Derby College will be heavily involved again this year with our students involved in marshalling, catering and competing.”

This year’s Jenson Button Trust Triathlon will involve hundreds of elite, seasoned and novice triathletes as well as teams of three in the Team Challenge, sponsored by Midlands business advisers and accountants Smith Cooper, competing alongside Formula 1 McLaren Honda racing driver Jenson Button in a day of sport.

Everyone will get the chance to race twice. The preliminary will consist of a 200m swim in Markeaton Lake; 10km cycle from the park and on closed roads into the city’s Cathedral Quarter before returning to the park to complete a 2.5km run. In the individual event, the top male and female performers will then go on to the finals – completing a 400m swim, 20km cycle and 5km run, with the runners up entering the wooden spoon race.  Participants in the Team Challenge, sponsored by Midlands’ accountants and business advisers Smith Cooper, will also race again in the afternoon over the Super Sprint distance and the team with the fastest average time will emerge victorious.

The prize fund available to competitors is one of the largest for a UK based sprint triathlon. A grand total of £7000 will be on offer, split between the male and female categories. Spectators are invited to join in the fun.  As well as the opportunity to watch the competitors in action, a wide range of family activities will also be held at the event village set up in Markeaton Park.

During the JBTT lunchtime break – the ‘Be More Bailey’ free family challenge will be open to youngsters aged eight and above who, accompanied by an adult, will start with a 50m swim in the lake then head out onto the closed roads for a 2.5km cycle before a 750m run – crossing the same finishing line as the JBTT triathletes. The day will culminate in medal presentations by Jenson Button and a post-race party for participants with live music and locally-produced food and drink. Funds raised by the main Jenson Button Trust Triathlon will again support Cancer Research UK.

Registrations for the Jenson Button Trust Triathlon and the Be More Bailey Challenge will close on July 10.  To enter and for more information, please visit www.jensonbuttontri.com and, for latest news and training tips, please follow on Twitter @JBTrustTri