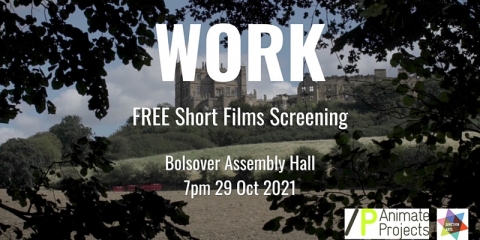 All four films were made by artists in collaboration with communities and organisations across the Midlands.

This is a free screening of all four films with a total run time of 81 minutes. There will be a Q&A with Esther Johnson after the films. Seating will be socially distanced.

Every ticket comes with a free drink. Snacks and bar available. Doors open 6:30pm, films start at 7pm with Q&A to follow.

'Alongside' by Dryden Goodwin (Derby)
Alongside is a closely observed portrait of a care worker as he builds supportive relationships with three vulnerable clients with severe physical disabilities or autism. The need to observe, decipher and translate, are mirrored in the filmmaking process as Goodwin combines drawing, camera and sound in his inquiry into proximity and empathy.

'The Great Bear' by Jenny Holt (Northamptonshire)
Made in and around Thrapston, a market town in rural Northamptonshire, The Great Bear explores narratives of labour and landscape in the English Midlands. Historically rural, with a strong farming identity, the area’s close proximity to arterial road networks has sparked a growing logistics economy with an international workforce.

'People Meeting in a Room' by Adam Lewis Jacob (Birmingham)
People Meeting in a Room reflects on collective film making and workers’ activism. Developed over a year, it connects the histories of activists and film makers associated with the Birmingham Trade Union Resource Centre in the 1980s with a group of contemporary collaborators.

'a ROLE to PLAY' by Esther Johnson (Bolsover)
a ROLE to PLAY brings together the lived experiences and dreams of Bolsover residents, one of the most deprived towns in the middle of England. Working with Bolsover Freedom Community Project food bank users, volunteers, adult reading group members, and former Bolsover MP (1970-2019) Dennis Skinner, the film tells stories of the impact of economic changes in post-industrial Bolsover, a Derbyshire constituency where coal was once king.

Tickets are only available to pre-book and will not be available on the door. Please do not attend if you have COVID-19 symptoms and remember to respect social distancing. We encourage mask wearing when moving around the space and when not eating or drinking. Free parking on site and around Bolsover.