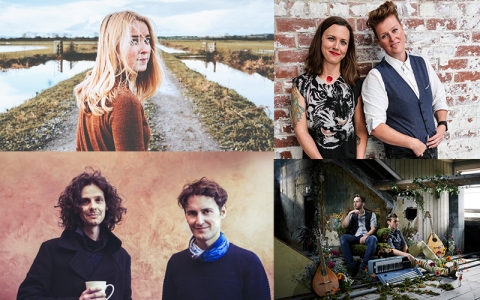 The full line-up has been confirmed for Derby Folk Festival, which takes place in the heart of the city centre from Fri 1 to Sun 3 Oct.

Joining O’Hooley and Tidow, Kitty Macfarlane, Ninebarrow, India Electric Co. and Home Service are old friends and new faces alike. Concerts will take place throughout the weekend on the Mick Peat Stage in the Market Place, named in honour of the festival’s co-director who sadly died in January, and in Derby Cathedral on Sat 2 Oct.

The Mick Peat Stage will be the scene of a special tribute concert on the Saturday, which will include the presentation of the first Mick Peat Drystone Bursary. Well-known for his own music as well as his involvement in Derby Folk Festival and support for the local Folk music scene, Mick was a co-founder of Drystone, an organisation set up by artists to build and re-build the arts following the Covid-19 crisis. Applications for the bursary are open to anyone involved in the creative industries who are working to make this happen, and close on 31 Aug 2021. For more information see drystone.co.

Full details about all of the concerts, including the tribute concert, how to buy tickets for individual days, as well as information about festival fringe activities, will be announced soon. Weekend tickets are on sale and guarantee you entry to all concerts on the Mick Peat Stage from 6pm on Friday 1 Oct to Sun 3 Oct, all shows in Derby Cathedral on Sat 2 Oct, plus more events yet to be announced.

Appearing on Fri 1 Oct on the Mick Peat Stage are:

Confirmed for the Mick Peat Stage on Sat 2 Oct are:

Performing in the atmospheric surroundings of Derby Cathedral on Sat 2 Oct will be:

Appearing on the Mick Peat Stage on Sun 3 Oct are:

Alongside the main festival concerts, the Fringe programme is being developed and will include some fantastic performances, music sessions and workshops in the Old Bell Hotel. Look out for news on more activity around the city centre, on the festival’s Facebook Page @DerbyFolkFest.

Book your weekend tickets before 30 June to take advantage of the early bird offer of £85 for adults, and £200 for a family ticket (child tickets are the same price), plus entry into a prize draw, to be drawn on 1 July, with the chance to win a refund on your ticket plus a mystery bundle of festival goodies!

To keep up to date with what’s happening at the festival, see www.derbyfolkfestival.co.uk.