The Importance of Digging Holes: The Great War and More by “Harp & A Monkey” 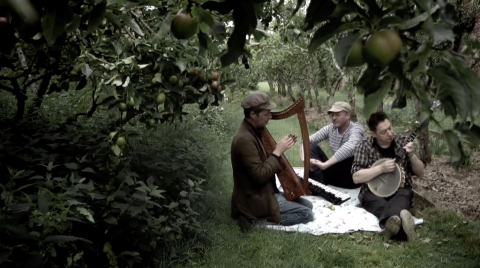 Harp & A Monkey, the award-winning electro-folk music and storytelling trio, is performing “The Importance of Digging Holes”, to mark the ongoing centenary of the First World War. The show features both original songs and re-workings of traditional tunes of the day. The band strives to challenge stereotypes of the conflict, and focuses heavily on forgotten aspects of the war (from the horror of being a postman, to the role of musicians) and also on the forgotten men - those ex-servicemen who came home, and their families. The band is fronted by fantastic raconteur and BBC 'Who Do You Think You Are?' historian, Dr Martin Purdy.

Harp and a Monkey, who specialise in moving, amusing and melodic short stories about life, love and remembrance, have been described as “bold and brilliant” by national British newspapers like The Observer, “fantastic” by leading BBC broadcasters like Mark Radcliffe, and “inventive” by international music magazines like Mojo. Such is the outfit’s reputation as a quality live act, they have twice been invited to appear at the annual international showcase (The English Folk Expo) that highlights the best English folk acts on the circuit. They were also named ‘best band’ in the annual folking.com awards in 2016.

The trio, who have been friends for decades, enjoy a fantastic rapport with their audiences and are renowned for their intriguing projects, which have seen them working with museums, art galleries

Suitable for those aged 8 and over.