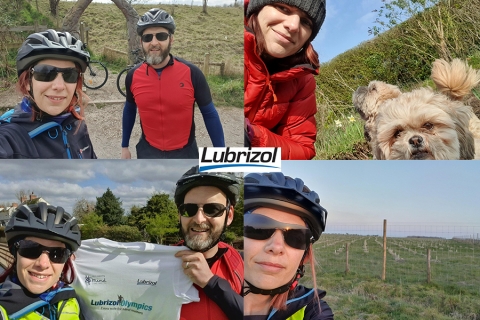 A Derbyshire couple has raised more than £1,000 for a mental health charity and boosted their own wellbeing at the same time.

Claire Hollingshurst and her husband Tim, who both work at Lubrizol, pledged to walk, run and cycle 603 miles between them in just four weeks – the distance from Land’s End to John o’Groats as the crow flies.

The pair, from Horsley Woodhouse, embarked on the colossal challenge to fundraise for the mental health charity Mind, which provides advice and support, raises awareness and promotes understanding.

Claire said: “We managed to walk 136 miles, cycle 480 miles and run more than eight miles across a 30-day period and the split was pretty much 50-50 between us.

“Tim and I were really keen to help support Mind and promote an understanding of mental health and how every mind matters. We also want everyone to know that it’s okay not to be okay.

“It isn’t wrong to reach out for support when you need it. I personally have done this with Tim and with professional help, when I experienced mental health problems and I am so grateful that I was able to talk to others and get the help I needed.

“I’m not going to lie, this challenge was hard and I think even our Shih Tzu dogs, Raven and Rogue, were exhausted by the end of it. They’ve never been walked as much.”

The couple have raised £812 – smashing their £600 target - and Lubrizol has agreed to top up the money pot with its own £250 contribution.

The Hollingshurst’s challenge also formed part of a company-wide fundraiser called the Lubrizol Olympics, which will see colleagues joining forces to raise a minimum of £25,000 for Mind by covering 5,882 miles – the equivalent distance between the UK and Japan where the Tokyo Olympics will be staged.

Staff have pledged to complete a variety of challenges including rowing the distance of the English Channel, cycling 100 miles and even clocking up 300 miles trekking across the Sahara Desert – providing coronavirus restrictions allow it.

Tim said: “We both felt better for taking on this challenge, both mentally and physically. It also brought us closer together which was an unexpected bonus.

“It’s also nice that this challenge was part of a wider picture and it’s always great to see Lubrizol staff coming together to raise money and awareness for such a worthy cause.

“The fundraiser has truly strengthened our workforce and provided an important outlet amidst such uncertain and, quite frankly, isolating times.

“Mental health affects so many of us, particularly now, so we want to do all we can to support Mind in their mission to ensure everyone experiencing mental health problems gets the support and respect they deserve.”