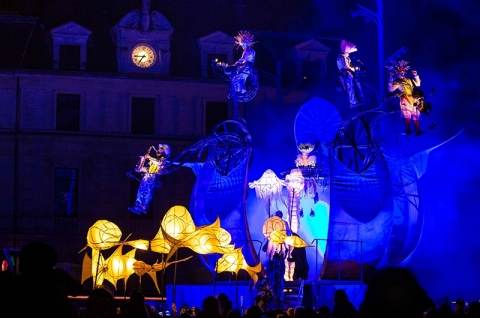 Derby’s Bass’ Recreation Ground will be transformed into a magical underwater spectacle for the headline act at this September’s Derby Festé 2016.

French company Transe Express will bring its brand new outdoor performance MÚ to the city on the evening of Saturday September 24 which will be only its second performance in the UK.

The atmospheric show will transport the crowds to a magic oceanic world. Colourful neon sea creatures elevated on a huge telescopic crane will cavort on the lit surface of the sea with the fish and other ocean dwellers weaving their way through the audience on the sea bed.

Derby Festé Artistic Lead Stephen Munn is Director at regional dance house Déda.  He said: “MÚ starts with the eerily calm spectacle of glowing sea creatures moving gracefully above and amongst the audience with a haunting original soundtrack and then builds to a crescendo that is spine tingling. “Many people will remember Transe Express’ spectacular aerial show ‘Mobile Homme’ back in 2008 and we are delighted to have secured just the second performance in the UK of this brand new show. “They will arrive and give a great event that will have grace, creativity and emotion and I am sure that everyone will love it and be talking about it for many years to come.”

Derby Festé 2016 will be held on Friday September 23 and Saturday 24.  It is the tenth outdoor arts festival in the city and a partnership of city arts organisations who work together to plan the two-day event - Déda, Derby LIVE, Derby Theatre and QUAD.

The Friday night headline act has already been confirmed with the return of the stunning Sarruga Dragons who took the city by storm at the first ever Festé in 2007. The Sarruga Dragons are giant robotic creatures created by world famous Catalonian street-arts company Sarruga who have performed across the world. The breath-taking parade will wind its way through St Peters Quarter and the Cathedral Quarter before making a spectacular entrance to the Market Place.

Stephen Munn continued: “The confirmation of the Sarruga Dragons and now MÚ show two different but equally  stunning aspects of outdoor performance. “The Sarruga Dragons are an amazing spectacle as they roam through the city streets and MÚ is a beautiful and emotional journey that is a feast for the senses thanks to its ethereal splendour. “These two headline acts – coupled with the packed programme that will be announced in the coming weeks and months as we approach Derby Festé will make this tenth festival two days for all the family to enjoy.”

MÚ is Derby Festé’s only ticket event.  Prices are £7 each and will be available to purchase online or via the Derby LIVE Box Office in May.