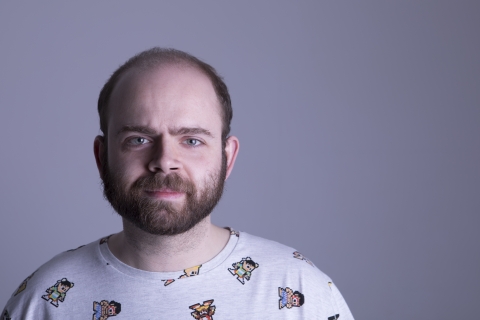 Genre Fluid, the self-confessed ‘not quite a poetry show, not quite a comedy show’, has been named best solo show at this year’s Morecambe Fringe Digital Festival.

Written by Derby based spoken word artist Dan Webber, ‘Genre Fluid’ is a study into labels in the arts, in everyday life and in the LGBTQ+ community.

The show has toured extensively since 2019, being performed at Edinburgh Festival Fringe, Reading Fringe Festival and The Leicester Comedy Festival and was about to begin a second run of tour dates when the Coronavirus pandemic hit.

“It’s been incredibly difficult, as it has been for a lot of people” Dan explained, when asked about COVID-19. “All my performances were cancelled near enough on the same night, one of the only saving graces has been the chance to get to grips with digital performance, and the ability to reach a wider audience. This nod from Morecambe Fringe means the world, especially under the current circumstances”.

In addition to Morecambe Fringe, Genre Fluid has been performed digitally at Reading Fringe Festival and Ludlow Fringe, with a special ‘Quarantine’ edition being commissioned for this year’s Coventry Pride. Dan has also appeared virtually at Leeds LGBT Literature Festival, Nott-stopping Festival, Nottingham and The Hollywood Fringe Festival, plus numerous UK Pride events.

Genre Fluid, A book of the show is published by Big White Shed, with support from The Big House.