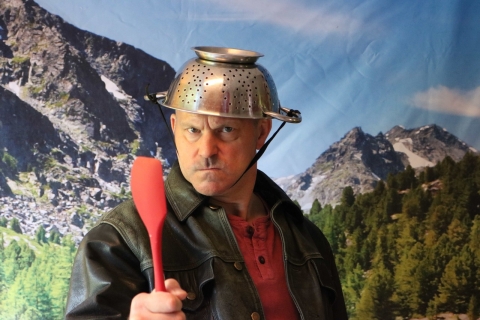 Whilst touring theatre company Oddsocks Productions are unable to appear at Markeaton Park, Derby this summer, they are making the most of the fact that they are a family run company and are creating performances from home during lockdown.

The company’s performance of  “Macbeth", filmed live from their home attracted an online audience of over 3000 when it aired last Friday night and in response to requests from viewers the company has posted the performance on their website; https://www.oddsocks.co.uk/online-performance-donations  and are already planning their next live edited Shakespeare play; “A Midsummer Night’s Dream” ready for live performance on the evening of Friday 19th June at 7pm.

“Macbeth really seemed to 'hit the mark’ ” says Creative Producer/Mum, Elli Mackenzie, who played Lady Macbeth  “We didn’t know whether anyone would tune in, but just before we went on air our director who was hosting the performance through his streaming theatre in L.A. calmly told us that there were one and a half thousand people across the world tuned in already and that grew as the performance started and by the end we were streaming live to an audience of over three thousand!”.

“The response since the broadcast has been tremendous” added Artistic Director/Dad Andy Barrow who played Macbeth “people have been in touch via social media and email in their droves, telling us that it’s made their lockdown and how they needed a laugh and our performance provided just that.”

The Oddsocks family told the story using the original text (a little trimmed!),3 mobile phones, 4 good laptops and 1 really dodgy one and a range of household items such as kitchen spatulas for swords, a colander for Macbeth's helmet and dolls and a unicorn slipper for apparitions in their fast moving, ambitious domestic retelling of Shakespeare’s most popular of tragedies “Macbeth”.  Andy and Elli’s 19 year old daughter Charlie was also roped in to play the roles of McDuff and Banquo and enjoyed the experience so much she says she signing up for the next performance.

“It really was an experiment to see if we could do it” says director Kevin Kemp of The Streaming Theatre based in L.A.  “We used twitch.tv as our streaming platform which is usually used by gamers and has recently been expanding into music but this may well be one of the first Shakespeare plays to have been aired via the platform and that is really exciting, as it may have brought a new audience to Shakespeare.”

The performance on Friday was cleverly interwoven with references to lockdown as Macbeth and Lady Macbeth sang “Happy birthday” when washing the murdered King Duncan’s blood from their hands and Macbeth turned vlogger to speak to the audience through his mobile phone.

Oddsocks is usually preparing to tour the UK with open air Shakespeare by now and this being on hold for the foreseeable future has meant looking at alternatives to keep in touch with their audience and given the response to this first live online experiment, they will be eager to tune in again.

In the meantime The Streaming Theatre is hosting a live Q&A about the making of the performance on Friday 22nd May at 7.30pm entitled:

How We Made Our 45 min comedy Macbeth.

Viewers interested in the behind the scenes story can join in by going to:

"This was a belly laugh. We have seen them live before, and thoroughly recommend this and any future productions. This will keep you sane!"

"Best use of fridge-cam I've ever seen. And a battle scene to die for. Magnificent!! Looking forward to the next show!"

"Having all those cameras working and then edited live was quite an achievement. Excellent night thank you"

"It was brilliant!!! Thank you for the most I’ve laughed in months”