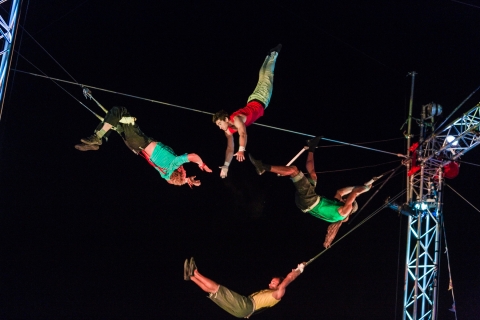 Visitors to Derby Festé this September will be able to enjoy the very best of different cultures in a two-day outdoor entertainment spectacular.

Derby Festé has been a highlight in the city’s calendar for the past 11 years and this year’s festival will be held on Friday September 29 and Saturday September 30 with the theme of fusing Western and Eastern cultures in the most spectacular fashion.

Regular visitors to Festé will have noticed that the festival is slightly later this year and this is to enable it to coincide with the climax of the Navratri Festival.

The nine-day Hindu festival, which is celebrated across the world, finishes on Friday September 29 and is even more significant this year as it coincides with the 70th anniversary celebrations of India’s independence.

Derby Festé will open on Friday night at Bass’ Recreation Ground which will be transformed into ‘Circus World’ from late afternoon.

The ticketed event will feature a wide range of contemporary circus acts from across Europe with visitors also able to enjoy an array of food and drink from around the world in a food village.

The excitement will then build up to the showcase which will be a show-stopping aerial performance of ‘The Altitude Show’ by European artists Gorilla Circus.

Saturday will see the return of the popular free programme of street entertainment across the Cathedral Quarter and St Peters Quarter with dance, street theatre, comedy and contemporary circus acts performing throughout the day at various locations.

Then late afternoon, the focus will be on South Asian style cultural celebrations and the crowds will gather for the ‘Colour of Time’ procession.

Choreographed by French company Artonik and involving students from the University of Derby and Derby College, ‘Colour of Time’ will be a rainbow eruption of coloured powder and dance.

The parade brings a stunning reinvention of the traditional Holi festival celebrated in India. Each year, people throw gulal powder in the air showing great joy and mirth, celebrating unity and an acceptance of diversity.

Dancers and musicians will move through the city centre in a choreographed parade towards Cathedral Green with the audience invited to join the finale - painting the sky with an explosion of Gulal powder.

Later in the Market Place, dancers will lead the traditional Garba dance which is performed as part of the Navratri Festival and originates from the state of Gujarat in India.

Many traditional Garbas are performed around a centrally lit lamp or a picture or statue of the Goddess Shakti and Festé’s interpretation of this will be ornate decoration and lighting suspended high over the Market Place.

A team of dance artists will be visiting schools and different community groups in Derby, Leicester and Nottingham in the run up to Derby Festé to teach them the simple dance steps and they will then be encouraging the audience on the night to join in.

The Festé Garba is a celebration of Derby and is for everyone to enjoy. The evening will be filled with live music, performance and dancing surrounded by the sights, sounds and delicious smells of the Derby Night Market.

The Night Market, organised by Sheena Holland was a popular addition to the Festé calendar last year and will again feature a wide range of arts, crafts and vintage stalls as well as food and drink stalls.

Derby Festé 2017 is produced and presented by Derby LIVE, Déda, QUAD and Derby Theatre in association with the Without Walls Associate Touring Network, Artcore and Baby People. It is funded by Arts Council England and Derby City Council, with sponsorship from Cathedral Quarter, Intu Derby, Derby Riverlights, Park Farm Shopping Centre and the University of Derby.

Derby Feste Artistic Lead Stephen Munn explained the theme of this year’s festival: “Every year we look to bring a new aspect into the Derby Festé programme and our aim this September is to showcase two different aspects of festival cultures in Europe and in South Asia.

“I and colleagues from the University of Derby and Artcore were lucky enough to be invited to see the Navrati Festival two years ago in Vadodara which was a truly spectacular event.

“I was amazed just how many people of all ages, cultures and backgrounds came out onto the streets to celebrate together and I wanted to replicate this as part of Festé.

“Just as the Navrati Festival started as a Hindu celebration in India and is now something that brings together all South Asian faiths.

“Similarly, Saturday evening’s entertainment at Festé will appeal to a wide range of people from across the whole region who want to enjoy and be part of live music, dance the colourful parade in a spectacle never before experienced before in Derby.

“We wanted to make the opening night a celebration of contemporary circus which is fast becoming the headline feature of festivals across all major European cities.

“This will be only entertainment that requires tickets which helps to secure the long-term future of Derby Festé and will be a fantastic event for all the family to enjoy.

“We have an array of acts from fire jugglers to stilt walkers which will prelude the breath taking ‘Altitude Show’ aerial acrobatic performance which I guarantee will be something totally new and exciting for people to see.”