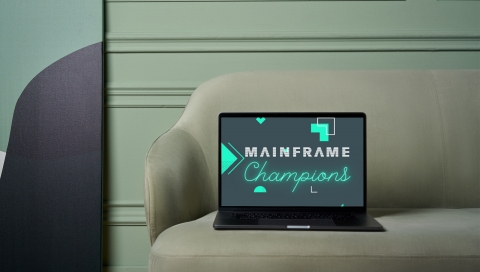 We truly believe in the value of networking, collaboration and joining up with others to make everybody stronger. So we are delighted to be making representation from our small corner of Derbyshire as a Mainframe Champion.

Our involvement as Mainframe Champions is twofold. As Destination Digital, we bring over 25 years’ worth of experience in the Internet industry, having cut our teeth during the dot.com bubble in the 90s. We remember eBay being invented (we didn’t think much of it at the time!), Amazon being launched (it was ugly then, and it’s ugly now), Google being invented (much better than Magellan and Dogpile), Facebook being launched, Twitter being launched, Instagram being launched.

We’ve plugged commando leads into banks of Sun servers in our own nuclear bombproof server rooms – before there was a cloud, you had to make your own! And we’ve seen the demise of MySpace, Google Plus, Vine, Bebo, Flash development, the withering away of Bing, Netscape being sunsetted and trade mags like New Media Age bowing out and saying good night. So you could say we’ve been round the block a bit.

We are also involved with Mainframe via the Arts Derbyshire brand with whom we’ve had a long and fruitful relationship navigating the twists and turns that get thrown up by the arts industry as the years have ticked by. For this strand of involvement with Mainframe, we will bring ”Art” with a capital “A” to the party. We’ve been involved in lots of different initiatives in the arts and creative industries sectors across the county over the years and are really well connected, so hope to be able to offer meaningful support to those who need it.

As active FSB members where Destination Digital’s Debbie Porter is a local volunteer rep for the organisation too, we’ve contacts that could help in a number of ways for small businesses looking for support.

We are looking forward to the 21st of July when the first physical meet up will take place at Derby QUAD. So watch this space and get in touch if you want to have a chat about our involvement.